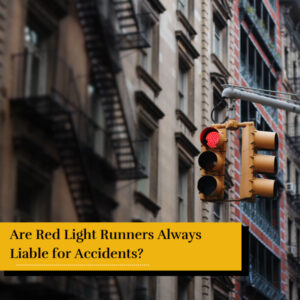 One of the most common causes of car accidents is running red lights at intersections. In a 2019 report, AAA found that fatalities caused by running red lights had reached a 10-year-high. The motorist who runs the red light is typically found to be at-fault for a red light crash, but are they always the liable party? Or could other parties potentially share fault with the red light runner?

Below, we will discuss who can be held responsible for a red light crash and under what circumstances fault might be shared. If you were seriously injured in a red light collision, contact a New York car accident attorney at Finz & Finz, P.C. for a free case evaluation. We have the resources to help you pursue the compensation you need to cover your losses.

Who Can Be Held Liable for a Red Light Crash and How is Liability Determined?

First, it’s important to establish that New York is a no-fault state for auto insurance. In New York, all motorists are required to carry at least $50,000 in personal injury protection (PIP) coverage, also called no-fault insurance.

However, New York allows individuals who suffer “serious injuries” in car accidents to step outside the state’s no-fault auto insurance system and bring a third-party claim directly against the at-fault driver. If you were injured in a red light accident, and you suffered serious injuries, you could be entitled to pursue additional compensation (including compensation for non-financial losses) from the motorist who ran the red light and caused the crash.

If you were seriously injured in a red light accident, you will still need to prove liability to bring a successful claim against the at-fault motorist. In general, the motorist who ran the red light is found to be the liable party in a red light crash. If you (or your attorney) can collect and preserve evidence to demonstrate that the red light runner clearly caused the accident and your injuries, you can successfully prove your case.

However, liability could potentially be shared even if the motorist who hit you ran a red light. All drivers have a responsibility to protect other drivers from harm, regardless of whether they have the right of way. If you see a motorist running a red light, and you enter the intersection anyway, you might be found partially liable for the accident.

Don’t be surprised if the at-fault driver’s insurance company tries to challenge your claim, especially if there was no camera at the intersection where the accident occurred. For instance, the insurance company could claim that their policyholder actually had a green light to avoid a large payout. That’s why it is crucial to hire an experienced red light accident attorney to handle your case. An attorney will have all the resources you need to quickly gather and preserve evidence of liability, including surveillance footage, witness testimony, police reports, cell phone data, and other documentation.

If a police officer catches a motorist running a red light, they can pull them over and issue a traffic citation for violating the New York Vehicle and Traffic statutes such as VTL 1110(a) (failure to obey a traffic control device) or VTL 1111(d)-1 (failure to stop in the appropriate place at a red light).

Being ticketed by police for violating VTL 1110(a) can carry certain penalties, including up to $150 in fines, a surcharge of up to $85, 2 points on the driver’s license, and no more than 15 days in jail. Some individuals who are charged with running a red light also receive a citation for reckless driving, which can carry steep penalties.

The penalty for being convicted of violating VTL 1111(d)-1 in a city with more than a million residents like New York may include up to $450 in fines, up to $85 in surcharges, 3 points on the driver’s license, and a maximum of 15 days in jail. Some drivers who are pulled over after running a red light may be charged with violating both of the above statutes.

Motorists who are caught running a red light by a traffic camera must typically pay a $50 ticket, according to the City of New York’s website. They will generally receive a notice of liability in the mail within 30 days of the incident.

If you were involved in an accident with a driver who was running a red light, and that driver was issued a traffic citation, you could use the traffic citation to bolster your insurance claim or civil lawsuit against the motorist.

Most motorists are aware that running a red light comes with risks. However, rather than prioritizing safety, some motorists race to beat a yellow light or willfully ignore the potential dangers of not stopping at an intersection. Some of the most common reasons why motorists run red lights include:

Regardless of their reason for doing so, any motorist who runs a red light has the potential to cause a devastating crash that results in severe, even life-altering injuries, especially if the motorist is traveling at a high rate of speed.

Were you severely injured in a red light accident in New York? If so, you deserve to be compensated for your injuries. Whether you are filing a claim with your own PIP provider or with the at-fault driver’s insurance company, we can help you seek the financial relief you need to pay for your medical expenses, lost wages, and more. Contact Finz & Finz, P.C. today for a consultation, which we provide free of charge to all potential clients.