If you took the heartburn medication Zantac and later developed cancer as a result, then you might be entitled to seek significant financial compensation from the manufacturer. Both Zantac and its generic counterpart, ranitidine, were found to be contaminated with the impurity N-nitrosodimethylamine (NDMA), which has been linked to the development of cancer.

Pending lawsuits against the manufacturers of Zantac allege that these companies were negligent in their duty to keep patients safe by putting a hazardous product on the market without disclosing its potential to harm patients.

At Finz & Finz, P.C., we represent Zantac victims in New York and throughout the United States who have been injured by the use of this defective drug. Our New York product liability attorneys are helping clients collect financial compensation for damages, including medical expenses, lost wages, pain and suffering, and more.

If you believe that Zantac caused your cancer, then don’t wait to contact one of our dedicated New York defective drug attorneys. We’ll help you understand your legal rights and options.

Who Can File a Zantac Lawsuit?

Zantac lawsuits are not part of a class-action lawsuit. These lawsuits are filed by individuals who have been injured by the use of Zantac against the drug manufacturer. However, some of these individual claims may join together in an MDL, or multidistrict litigation. The purpose of an MDL is to speed up the litigation and settlement process.

If you took Zantac and later developed any of the following types of cancer, then you may have grounds to file a claim:

There is a statute of limitations on this type of claim, which means you only have limited time to file a lawsuit in order to recoup the financial losses you have suffered. That is why it’s crucial to speak to an attorney right away if you believe that Zantac may have caused you to develop cancer.

The dangers of Zantac have been known for years. In fact, NDMA has been classified by the International Agency for Research on Cancer as a Group 2A carcinogen, meaning there is strong evidence that it can cause cancer in humans. As a result, Zantac has been recalled in more than 40 countries. The events leading up to and following its recall have been well documented.

Additional regulatory action may be forthcoming and further scientific studies are currently underway, the results of which are expected to be published soon. We will continue to update our clients as more information becomes available. 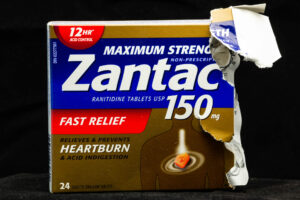 Over ten pharmaceutical companies manufactured prescription Zantac, while more than double that produced an over-the-counter version of the drug. Most of these companies no longer produce Zantac and have recalled their products from the market.

The brand name manufacturers named in the Zantac Multi-District Litigation (MDL) are:

What Conditions Is Zantac Designed to Treat?

Although Zantac has largely been removed from the market, it was traditionally used to treat conditions such as:

What Basis Do I Have for a Zantac Lawsuit?

You can file a Zantac lawsuit on two separate grounds: defective design and failure to warn.

Drug manufacturers can be held liable for defective design when it can be shown that there was an inherent defect in the design of the drug, which would therefore be present even when the product is manufactured and used correctly.

In the case of Zantac products, the FDA noted that the levels of NDMA in Zantac medication may increase over time while the medicine is stored, particularly at higher temperatures. It has also been shown that the carcinogen NDMA is a natural byproduct of Zantac’s active ingredient, ranitidine hydrochloride. When a patient ingests Zantac, a chemical reaction in the stomach may generate even higher levels of NDMA.

So, when filing a lawsuit, it could potentially be against any of the manufacturers of Zantac. There is evidence that Zantac is carcinogenic as a result of its design, and your lawyer may call upon scientific experts, including chemists, product engineers, and doctors, to present evidence of design defects in your case.

You may also file a lawsuit against a drug manufacturer based on the premise of failure to warn. The manufacturers of Zantac never included the carcinogenic properties of the drug on their drug labels. If prescribers had known about the potential dangers of the drug, it can be reasonably assumed that they would not have prescribed it to their patients. If patients had known about the carcinogenic effects, they would likely not have elected to take the drug.

How Do I Qualify for a Zantac Lawsuit?

If you believe that your cancer was caused by Zantac use, then you will typically need to satisfy three separate conditions in order to qualify for a Zantac lawsuit. By consulting with an attorney, you can determine whether or not you have a case.

Second, you will need to show that you have been diagnosed with cancer, specifically a type of cancer caused by NDMA such as bladder, prostate, esophageal, gastric, colorectal, liver or pancreatic cancers.

If you’ve been diagnosed with cancer after using Zantac, then you could be entitled to compensation. Compensation is designed to cover costs such as:

Families of those who have had loved ones pass away due to a cancer caused by Zantac may also seek compensation by filing a wrongful death claim.

If you have been diagnosed with cancer and believe that it was caused by your use of Zantac, then don’t wait to get in touch with one of our Zantac attorneys at Finz & Finz, P.C. in New York today. We aggressively litigate Zantac cancer cases throughout the United States. We will review your claim, determine whether you have a case, and help you pursue the compensation you need to recover financially. Contact us for a consultation today.