Despite the years of training doctors and other medical providers complete, and the specialized knowledge they have, they still make mistakes when caring for their patients. An often-cited study from Johns Hopkins University suggests that medical errors are the third-leading cause of death across the United States, and many of these errors are considered hospital malpractice.

If you were injured while undergoing treatment at a hospital or other medical facility, an experienced New York hospital malpractice lawyer at Finz & Finz, P.C. on Long Island can help. Our legal team includes a former New York State Supreme Court Justice who has been peer-reviewed as one of America’s preeminent trial lawyers and a lifetime member of the Multi-Million Dollar Advocates Forum. In addition, we have strong relationships with world-renowned medical experts who can support your case and testify on your behalf. We are dedicated to maximizing the financial compensation for our clients, many of whom have suffered life-altering injuries as a result of hospital malpractice, and since our founding, we have recovered more than $1 billion on their behalf.

Receive your free hospital malpractice legal consultation by calling our office or visiting our contact page.

Do I Have a Case for Hospital Medical Malpractice? 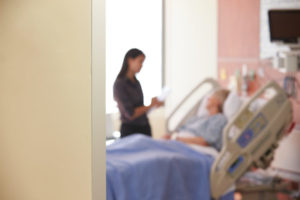 The main issue when it comes to suing a hospital or other medical facility for malpractice is that hospitals are generally only liable for injuries committed by their employees. This includes people like nurses, lab technicians, and other hospital staff, but it generally does not include doctors. Most hospitals classify doctors as independent contractors, in part to shield themselves from possible negligence claims. While you may have a valid claim against the doctor, you might not have a claim against a non-employer hospital.

A hospital malpractice lawyer from Finz & Finz, P.C. can tell you more about the legal relationship between a doctor and a hospital and whether you could have a case against the facility in which you were injured.

Hospitals We Have Litigated Against

Our medical malpractice team has litigated against nearly every hospital in New York City and Long Island, including each of the hospitals named below. We have decades of experience representing clients who have suffered from negligent medical care in hospital settings and we have obtained unique knowledge regarding how hospitals operate and defend medical malpractice cases.

If your injuries or diagnoses have been made worse by negligent hospital staff, you should contact Finz & Finz, P.C. today to learn more about your legal options.

Get a Free Case Review

These mistakes can occur in various areas of the hospital, such as the emergency room, operating room, labor and delivery room, outpatient facilities, intensive care unit (ICU), pediatrics, and elsewhere. Birth injuries, infections, surgical errors, unsanitary facilities or medical equipment, and failure to follow-up are a few common signs that a hospital might have been negligent.

Can I Sue a Hospital for Emotional Distress?

Yes, hospital malpractice victims can sue facilities for emotional distress. The emotional and psychological fallout from a medical error can be just as harmful as the physical injury itself, sometimes even more so.

Common examples of emotional harm from medical malpractice injuries include:

While you may technically sue a hospital for emotional distress, it can sometimes be difficult to prove these injuries. Emotional and psychological injuries do not always manifest physically. However, a hospital malpractice attorney may make recommendations such as keeping a journal to show how your daily life has been impacted by your injuries or assemble other evidence to support your claim.

How Long Do I Have to Sue a Hospital for Negligence?

The time period for filing a malpractice lawsuit against a hospital is set by New York’s statute of limitations. The law says that in most hospital malpractice cases, you have two and a half years from the date of your injuries to file a lawsuit.

However, there are a few critical exceptions to be aware of when it comes to time limits on malpractice suits. In cases where a doctor leaves an object inside a patient’s body, the injury may not be discovered until well after the initial incident took place. Therefore, the time limit in these cases is one year from discovering the foreign object or from learning something that would or should lead you to discover the foreign object.

Another major exception to the statute of limitations concerns cases where a provider fails to properly diagnose cancer in a patient. In these cases, patients have two and half years from the time they discovered or should have discovered the error to file a lawsuit.

In cases involving municipal or state hospitals, a Notice of Claim, which alerts the hospital that a lawsuit might be forthcoming, must be filed within 90 days of the malpractice. Therefore, it is critically important to speak with a medical malpractice law firm as soon as you suspect that a hospital has rendered negligent treatment.

Hospitals are required to meet the specific standards that outline their code of conduct to ensure public safety. When a hospital fails to do so, it may be held directly liable for its own negligence.

Some instances where a hospital may be held responsible for hospital negligence include:

Do I Need a Lawyer to Sue a Hospital?

Hiring a qualified and experienced medical malpractice lawyer before suing a hospital is critically important in determining the outcome of your case. Medical malpractice cases are very difficult to litigate because there is a high legal standard to prove that a hospital was negligent.

The medical malpractice team at Finz & Finz, P.C. knows what it takes to prove these cases. We work diligently to protect the rights of our clients – injured patients like you – just as we did when we recovered $9.75 million against a hospital for a child who suffered a severe injury due to a delay in treatment and $9.2 million for a woman who was malnourished and suffered from a delayed diagnosis at a hospital.

When you retain Finz & Finz, P.C. for your hospital malpractice case, you will receive the full benefit of our substantial experience and legal knowledge. Get your free case review today by calling our office or visiting our contact page.