Verification ×
Skip Navigation
Home Blog What is the Difference Between Aggressive Driving and Road Rage?

What is the Difference Between Aggressive Driving and Road Rage? 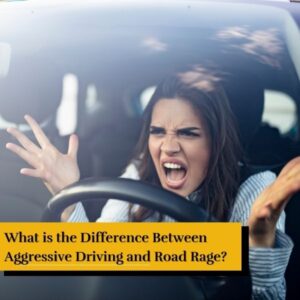 When you hear the term “aggressive driving,” you probably think of road rage, and while the words are often used interchangeably, they have two distinct meanings.

Of course, that doesn’t mean that they aren’t sometimes connected. Aggressive driving can lead to road rage and vice versa. But it’s essential to understand the differences between the two terms under the law.

If you were seriously injured in a motor vehicle accident that involved aggressive driving or road rage, you could be entitled to financial relief. The New York aggressive driving attorneys at Finz & Finz, P.C. have extensive experience helping clients who have been severely hurt in aggressive driving and road rage accidents seek justice through compensation. Contact us today for a free consultation.

What Is Aggressive Driving?

Aggressive driving might result from negligence, inexperience, or a willful disregard for the safety of others. Regardless, aggressive drivers have the potential to cause significant property damage and devastating injuries.

If you’ve been injured in an accident caused by an aggressive driver in New York, you might be entitled to hold them accountable for their misconduct through a claim or lawsuit. You should speak to an attorney as soon as possible to discuss your legal options.

What Is Road Rage?

Road rage is distinct from aggressive driving in one primary way. For a person to engage in “road rage,” they must actively try to harm other motorists using their vehicle. Many people believe that road rage simply involves shouting, cursing, gesturing offensively, honking, and intimidating others using a vehicle, but unlike aggressive driving, road rage singles out and directly target another motorist.

Road rage often involves intentional violence between the perpetrator and another motorist. An angry driver may sometimes commit vehicular manslaughter or assault by deliberately crashing into another vehicle. In other instances, an angry driver may exit their vehicle and physically assault or even murder another driver due to road rage. As appalling as it sounds, homicides motivated by road rage are not uncommon.

Road rage continues to be a serious problem on the roads and highways across New York, so the best thing you can do for your safety is to avoid a confrontation with an angry driver.

Motorists who engage in aggressive driving are not targeting their actions at any specific person. They are simply driving recklessly or in a way that endangers others on the road. In New York, aggressive driving is typically considered a traffic violation, albeit a serious one.

However, road rage is a crime, and anyone who endangers, threatens, assaults, or kills other motorists can be charged with a serious crime and face steep penalties that could include fines, jail time, and probation. The enraged driver could also have their license suspended and revoked. Outside of the penal system, people convicted of road rage-related crimes could also lose their employment, experience rifts with family and friends, and suffer in other ways after serving their sentence.

Enraged drivers often don’t recognize when their anger or misconduct affects their ability to operate a car safely. As a result, their chances of causing an accident significantly increase.

How to Handle Aggressive or Angry Drivers

If you encounter an aggressive or enraged driver on the road, there are steps you can take to protect yourself and your passengers:

Enraged drivers have been known to commit serious violent crimes in their anger. If an angry driver confronts you, you should stop your vehicle in a public area, keep your doors locked, and call 911. The best thing that you can do is to de-escalate the situation. If you respond by getting angry, that could drive the other motorist to confront you physically. The other motorist may simmer down if you refuse to get angry. By staying calm and avoiding any action that could further incense the angry driver, you can hopefully avoid a dangerous confrontation until the police arrive.

If you are injured in an accident with another motorist, gauge whether the other motorist is behaving calmly and rationally before collecting evidence at the scene. Some drivers may get angry if they notice that you are taking photos or collecting additional information that you could use against them. If the motorist appears enraged, do your best to gather evidence inconspicuously and wait for law enforcement to get to the scene.

If the other driver is behaving angrily or irrationally, you could also use your phone to discreetly film evidence of their behavior. If any bystanders witnessed the accident and the other motorist’s behavior, you should speak to them and ask for their contact details. They might be able to provide a statement on your behalf later.

If you were severely injured in a car accident in New York, contact Finz & Finz, P.C. today. We have extensive experience helping those who’ve been injured by aggressive, enraged, or otherwise negligent drivers. We’ll be ready to put our skills to work for you. Call us or reach out to us online for a free consultation.