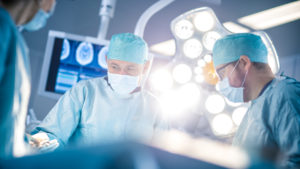 Our client was suffering from knee pain and possible infection in her right leg, the same leg in which she had prior knee replacement surgery. She sought treatment at a Nassau County hospital and arrived at the emergency room before being admitted as a patient. At the time, she was exhibiting signs of a serious Methicillin-Resistant Staphylococcus Aureus (MRSA) infection.

The hospital’s infectious disease doctor and orthopedist performed surgery in an attempt to clean her artificial knee implant and the surrounding area through a “washout” procedure, however, they decided against removing the implanted knee and the accompanying hardware adjacent to the infection despite knowing that artificial implants and knee replacement hardware can serve as reservoirs for bacteria due to a lack of natural blood flow.

Following the “washout” procedure, it became clear that the defendants failed to eliminate the MRSA infection, which continued to spread rapidly through our client’s leg. In order to rid her body from the infection, a full above-the-knee amputation was performed. Shortly thereafter, our law firm was retained to file a lawsuit on her behalf. After reviewing the medical records, we believed that the amputation was avoidable and that the hospital, infectious disease doctor, and orthopedic surgeon departed from good and accepted medical practice.

After the commencement of litigation, and following the completion of depositions and document discovery, the hospital, infectious disease doctor, and orthopedic surgeon each filed a motion for summary judgment, seeking to dismiss our client’s case. The defendants believed that they did not commit medical malpractice. They claimed that nothing could have been done to avoid the amputation and save our client’s right leg because she was a “poor healer.”

Our firm aggressively opposed these motions. With the support of our team of medical experts, we argued that the defendants had insufficient evidence to label our client a “poor healer” based on her medical history. We further argued that instead of performing the “washout” procedure, the defendants should have removed the artificial implants and related hardware near the area of infection to avoid the likelihood of a resurgence. Moreover, we argued that the defendants’ failure to remove the implants and hardware while treating the infection was a clear departure from good and accepted medical practice and that our client’s right leg could have been saved had the defendants acted within the standard of care.

In a decision issued by New York State Supreme Court Justice John Michael Galasso, the Court denied the defendants’ motion to dismiss our client’s case, finding that our client is entitled to have her case presented before a Nassau County jury.