A Tractor Trailer and the Flying Machine 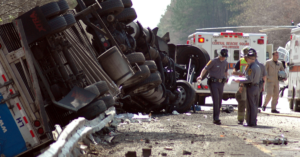 John (a fictitious name) had been driving tractor trailers for nearly 20 years. Being behind the wheel of a powerful rig had always been his dream. And he was good at it. Living in the South with his wife and teenage daughter, he would usually pick up a load of supermarket products from a designated depot and travel to a central location in Hartford, Connecticut, where his trailer’s content would be distributed to awaiting trucks. He loved his job and was so proud that in the thousands of miles he had travelled he had never had an accident.

The day in question was no different than others. The instruction received from his employer was that he pick up a load of frozen chicken parts packed in boxes that would ultimately find their way to the frozen food section of Northeast supermarkets. The tractor he drove was built as solid as the engine of a freight train. And when John sat in the driver’s seat of the cab, proud of the baseball cap that adorned his head, he was the king of his castle. The trailer that measured almost 60 feet in length on this trip was refrigerated, so that the products he was transporting would remain frozen.

Departing North Carolina before daylight arrived, he proceeded North on Interstate 95. Streaming through Virginia, Washington, DC, Maryland, Delaware, and New Jersey – the states he had passed through so many times before.

Many hours later, John had reached the tollbooth that displayed the sign, “Welcome to the New York State Thruway.” After throwing his usual friendly salute to one of the toll collectors, he headed North on his way to Hartford. What happened soon thereafter could have served as a tense action scene in a Hollywood movie…

As John powered his huge rig onto the New York State Thruway after leaving the tollbooth, he accelerated until it reached the speed limit of 65 MPH.  Suddenly, he felt a violent jolt on the front passenger side of his tractor. Instantly, he lost control as the tractor and attached trailer swung perilously to the right of the roadway. The huge thunderous rig slammed into a guardrail. The structure was no match for the rig that then was more like a runaway freight train. Pulverizing the rail, the tractor-trailer continued its uncontrollable motion, despite John’s desperate efforts to gain control. At that specific location, the thruway was elevated over a parkway, which was 35 feet below.  As the out-of-control rig kept moving with total disregard to John’s frantic efforts to bring it to a halt, its momentum and weight caused it to mount the right side of a protective wall, crushing it as it proceeded forward. Sixty tons of tractor-trailer, with John in the cab, flew in the air and plummeted down with volcanic impact upon the parkway 35 feet below. The crash bent the trailer into a pretzel-like metal mass. The tractor struck the pavement with equal force.

The trailer’s contents of frozen chicken were scattered all over the roadway. Fortunately, traffic on the parkway was light, and amazingly, no passenger vehicles were struck.  As for John, however, he was trapped in the crushed metal of the tractor. Motorists stopped their cars. They got out and ran to the crumbled rig believing that its trapped driver was probably dead. Despite heroic efforts, the Good Samaritans were unable to pry open the doors of the tractor.  Within 15 minutes, fire engines, police vehicles, and ambulances merged upon the horrendous scene. Jaws of Life were used to free open one door of the tractor. They reached John, who was unconscious and blood soaked. EMTs went to work within seconds. Miraculously, John was breathing, but fading fast. Oxygen was administered as other quick emergency measures were employed to keep him alive. Rushing John into a waiting ambulance, it sped off to the nearest hospital 20 minutes away. To have survived such a disaster would have been against all odds. But John did survive, although he suffered serious multiple fractures, a concussion, and internal injuries. Aside from John’s devastating condition, a troubling question had to be answered: What caused this calamity?

Weeks passed, and while John was recovering slowly in the hospital, a family member contacted our office. Our team immediately went to work. Engaging one of the most reputable highway engineers in the country, we needed answers to the big question as to what caused this accident—and we received them…

As we discovered, when John left the tollbooth and entered the New York State Thruway, road and skid marks on the pavement led the engineer to the exact spot where John had lost control of his rig. Our team joined the engineer at the scene. We all traced the gouges on the road and saw a large circular area that had been filled with blacktop. The engineer reported that the blacktop was reasonably fresh, and using electronic instruments, he was able to determine the depth of the hole that it covered, and the exact circumference that was measured. Working together with the engineer for several hours, there was sufficient evidence for him to conclude that John’s front passenger-side tire struck a deep and large pothole. It was the sudden contact of this massive road failure that alarmingly caused John to lose control of his rig.

As for John’s injuries, he remained in the hospital for six weeks. Thereafter, he was admitted into a rehab facility for two months and continued with physiotherapy for more than a year. Left with a permanent disability to both legs, he requires the use of a cane and has a decided limp. Painkillers are his daily ally, without which he could not function. As for his job, he can no longer drive and must now depend upon others, including his wife and teenage daughter for assistance.

John’s legal remedy was confined to the New York State Court of Claims (by law, a trial against New York State must be held in the Court of Claims and without a jury), where we instituted a lawsuit on his behalf. Fortunately, the Judge who tried the case rendered judgement on John’s behalf based upon all of the facts presented by our team over a three week trial. The Court of Claims Judge concluded that the State failed in its duty to maintain the highway in a reasonably safe condition, that it knew, or should have known, of the dangerous pothole, and that its failure to repair it caused the tragic accident that changed the quality of John’s life forever. End of story!

In truck accident cases, only those firms with extensive industry knowledge and tremendous financial resources can engage world-renowned experts to assist in formulating an aggressive and effective legal strategy that maximizes the client’s financial outcome. That’s why clients choose Finz & Finz, P.C., the law firm that has been representing the victims of catastrophic truck accidents for nearly four decades.