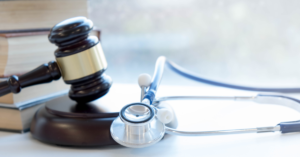 Joe worked for a local hospital. As a union member, he was a man of all trades ready to do whatever small jobs he was called to do. In reality, he was an in-house handyman, good with a screwdriver, pliers, and wrench. You get the idea!

One morning, his supervisor instructed Joe to take care of a clogged pipe that was located outside of the hospital. The assignment was no stranger, since whenever certain pipes were clogged, Joe would use a commercial drainage fluid that he would pour into the pipe until the clog was cleared. No sweat! As always, he picked up the drainage can, placed it in his golf cart, and drove to the location of the clogged pipe.  When there, Joe opened the can, and poured some of its contents into the pipe. Suddenly, there was an explosion and a flashback of the chemical fluid that struck Joe squarely in his right eye. He let out a loud scream. In pain and panic, he used his walkie-talkie for help. Within minutes, a hospital ambulance responded. Joe was on the ground, screaming, and in obvious pain. Taken immediately to the ER and attended to by an eye specialist who had already been called, the diagnosis was not good.  The corrosive chemicals in the drainage compound had destroyed his right eye. At age 52, and married with two kids, Joe was presented with a most difficult future – he would have to live his remaining life blind in one eye, one which would be surgically replaced with a cosmetic prothesis.

Sometime later, Joe retained a lawyer, a family friend, who brought suit against the manufacturer of the drainage compound. Unfortunately, the lawsuit languished and collected much dust, since the lawyer who had a small practice that included real estate closings, wills, matrimonial disputes, and some commercial matters, was way out of his league against the large defense firm that represented the national manufacturer.

After years of delays, Joe fired his lawyer and retained our firm.  When we received the file from the substituted attorney, it was a mess! Although the case was on the trial calendar, there was a complete absence of any technical and important pre-trial documents. No depositions! No experts! No witness statements! Nothing but total neglect by a lawyer whose lack of experience in product liability litigation was a glaring red flag.

The trial had been adjourned a zillion times and an angered Judge was ready to dismiss it if another adjournment was sought. We made an immediate motion to reopen discovery, so that we could depose the CEO of the defendant company. We argued that we were just substituted as the new attorneys in the case and that we should have the opportunity to do what was totally neglected by the prior attorney. The judge was sympathetic, but he was under pressure to move a case that was on his trial docket far beyond the permissible time. His decision, “Motion Denied”.  And the trial date was only three weeks away! The prior lawyer did manage to obtain the original can of chemical compound used by Joe. We examined the printed label on the can. Oddly, however, there was a word spelled out in large colorful block letters that stretched from the upper left corner of the can and diagonally down to the right lower corner. The word that screamed out on the can was “REGIT”.

Our trial team was flabbergasted. What was “REGIT”? We researched the scientific literature and found nothing. We consulted with chemical engineers and even with a chemical engineering professor at a prestigious university. Nobody could shed light on what “REGIT” meant. It was mystifying! The large block letters were extraordinarily prominent. By contrast, at the bottom right of the can, there was a warning that the user should wear safety goggles to protect the eyes from any chemical flashback. Amazingly, the size of the warning was a bit larger than a postage stamp and it was this “warning” that the defendant manufacturer claimed would bar any recovery to Joe, since he was not wearing protective eye goggles at the time he poured the chemical contents into the clogged pipe.

The trial date arrived, and despite our request for more time, the Judge once again directed that we proceed to select a jury or the case would be dismissed. Not much of a choice!

We subpoenaed the CEO of the company, and called him as our first witness. The examination started slowly, picked up steam, and was heading for the big question. One of the rules of trial advocacy is that a lawyer must never ask a question without knowing what the response of the witness would be. But despite the Hobson’s choice presented, the question had to be asked: “Mr. Jones, what does ‘REGIT’ mean?” The CEO squirmed in his seat. He hesitated. He tucked at his tie. He cleared his throat. His lips turned into an uneasy smile. He let out a slight laugh. And then, it finally came out. It was a shocking answer…

In short, the CEO responded that the salesman of the company who had the highest sales record for the year, and who was nicknamed “TIGER” was celebrated and honored by having his name imprinted backwards on every can. You got it! ”TIGER” spelled backwards is “REGIT”. His nickname on the can was as prominent as Mount Rushmore and the warning to wear safety goggles was as tiny as a grain of sand. That was it! And after that disclosure, coupled with the angered looks of disbelief on the faces of the jury, the case was settled for a huge amount. End of Story!

At Finz & Finz, P.C., we know what it takes to go up against Corporate America – expertise, determination, grit, financial resources and an insatiable desire to represent David against Goliath. We have represented clients who have suffered defective product injuries for nearly forty years. Please call us today for a free product liability case evaluation.