Verification ×
Skip Navigation
Home Blog Why Is the Long Island Expressway So Dangerous?

Why Is the Long Island Expressway So Dangerous? 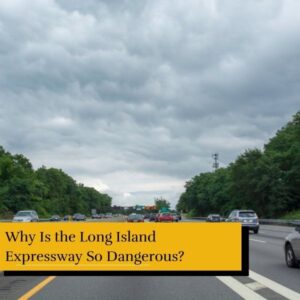 The Long Island Expressway, also referred to as Interstate 495, is a 71-mile highway that runs through three counties on Long Island: Queens, Nassau, and Suffolk. The Interstate directly links New York City and Long Island.

The Long Island Expressway is frequently backed up with traffic congestion, and drivers on this stretch of highway often engage in negligent actions such as speeding and texting, which can lead to crashes. The road’s infrastructure is also crumbling from years of wear and tear. Motorists have long complained about potholes and other structural problems along the highway.

All of these factors have led to an alarming number of accidents over the years, leading some to call Interstate 495 one of the most dangerous highways in the United States.

There are numerous causes of accidents on the Long Island Expressway, but there’s no question that both the roadway’s structural problems and driver negligence have contributed to many accidents on this stretch of road.

According to U.S. News & World Reports, Long Island counties reported some of the highest traffic fatality rates in the state. In 2020, for instance, 113 people died in traffic accidents in Suffolk County, while Nassau County recorded 78 traffic deaths. There were a total of 32,154 motor vehicle crashes in Suffolk County in 2020, more than any other county in New York state.

In the fall of 2021, Governor Hochul announced an $83 million plan to improve safety and decrease congestion on the Long Island Expressway through a new construction project. The project will increase road capacity with the goal of reducing traffic jams by constructing new auxiliary lanes in Queens. It will also extend entrance and exit ramps onto the Expressway in the Queens area, and replace an aging bridge in Bayside that runs atop the expressway’s east and westbound roadways with a newer, bike-friendly bridge.

In addition, the state will make a $157 million investment in pavement improvements to various roadways including a critical portion of the Long Island Expressway in western and central Suffolk County. The goal of the project is to repair potholes on the highway, which have been a major problem for motorists for many years. In total, the project will repave around 480 lane miles of roadways on Long Island.

How to Stay Safe on the Long Island Expressway

While the state works to make meaningful improvements to the Long Island Expressway, there are still things that motorists can do to prevent accidents, including:

While these safety precautions can offer you some protection while driving on the Expressway, there’s no way to predict how other motorists will behave. Below, we’ll discuss what you should do if you happen to be involved in a crash.

There are several steps you should take to protect your health and your rights if you were involved in a motor vehicle accident on the Long Island Expressway:

If you are involved in an accident that results in injuries or fatalities, you must report the crash to the Department of Motor Vehicles within 10 days. However, we also recommend calling the police to the scene so that they can create their own accident report as well.

If you were involved in an accident on Long Island, contact a New York car accident lawyer at Finz & Finz, P.C. for a free, no-risk consultation. If you were injured in the crash, you could be facing steep medical expenses and lost income, not to mention the physical and emotional pain and suffering. At Finz & Finz, P.C., our legal team has the resources to help you seek the financial relief you need to cover these costs. You can reach our office by calling 855-TOP-FIRM.