Verification ×
Skip Navigation
Home Blog Why Didn’t My Airbags Deploy in a Crash?

Why Didn’t My Airbags Deploy in a Crash? 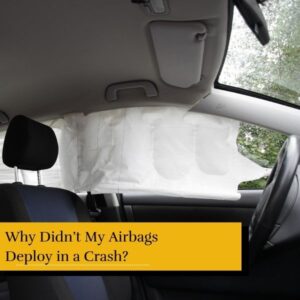 Airbags are a critical modern auto safety feature that are designed to protect motorists and their passengers from the force of a collision. Having working airbags significantly improves your chances of survival if you are involved in a serious crash. Unfortunately, airbags don’t always work as they’re supposed to. If your airbags don’t deploy in the event of a serious collision, you and your passengers could end up suffering far worse injuries than you would have if your airbags had worked as they were supposed to.

Below, the New York car accident lawyers at Finz & Finz, P.C. review some of the reasons why airbags fail to deploy and discuss who is liable if you’ve suffered significant injuries due to airbag failure. And if you’ve been injured as the result of ineffective airbags, contact us today for a free consultation.

It’s also important to note that sometimes airbags don’t deploy because they aren’t supposed to. For example, airbags do not usually deploy in minor fender-bender accidents, accidents involving potholes and speed humps, when a vehicle hits a curb, a parking barrier, or another inanimate object, crashes involving animals (especially smaller animals), and collisions that don’t involve sudden, rapid deceleration (for instance, rear-end accidents).

Depending on the circumstances of your accident, there might be a valid reason why your airbag didn’t work. An experienced car accident lawyer can help you determine whether or not your airbags should have worked based on the facts of your case.

Who Can Be Held Liable if Airbags Don’t Deploy?

New York is a no-fault auto insurance state. In a traditional tort state, car accident victims are allowed to file a claim for compensation against the person who caused their injuries. In a no-fault state like New York, individuals who have been injured in minor car accidents typically turn to their personal injury protection (PIP) policy for coverage. All New York motorists must possess at least $50,000 in PIP coverage. PIP benefits cover medical expenses and lost income up to the policyholder’s limits.

However, if you suffered a serious injury in a car accident that was caused by someone else’s negligence, you could step outside of New York no-fault auto insurance system and file a third-party insurance claim or personal injury lawsuit directly against the motorist who hit you.

For your case to be successful, you’ll need to be able to prove that the other driver was negligent in some manner that led to the accident and your injuries. Through a personal injury claim or lawsuit you could recoup compensation not available under your PIP policy. In addition to medical expenses and lost income, you could seek financial relief for non-financial losses like pain and suffering and loss of enjoyment/quality of life.

If your airbag did not properly deploy and you were seriously injured as a result, you might be able to pursue additional compensation through a product liability lawsuit against the airbag manufacturer or automaker. However, because you are already pursuing compensation from the driver who caused the accident and your injuries, you will need to provide evidence that your injuries are significantly worse than they would have been if your airbags had worked properly during the crash.

To determine whether you have a valid claim or lawsuit, your attorney may consult with medical experts and accident reconstruction experts who have the skills to determine whether your injuries were made worse because your airbags did not work. If these professionals believe that your injuries are indeed more serious because of airbag failure, they can testify to this fact in court, which could significantly strengthen your case.

If you were seriously injured in a car accident in New York, and you believe that your injuries are more severe because your airbags didn’t deploy properly during the collision, you might be legally entitled to hold the airbag manufacturer or the automaker accountable for their negligence.

The New York airbag injury lawyers at Finz & Finz, P.C. have the knowledge and experience to help you determine whether you qualify for a product liability lawsuit, and to guide you through every step of the legal process. Call us today at 855-TOP-FIRM for a free consultation with our office. We will help you assess your legal options and pursue the financial relief you deserve.