Verification ×
Skip Navigation
Home Blog Who Can Be Held Liable for a Bus Accident?

Who Can Be Held Liable for a Bus Accident? 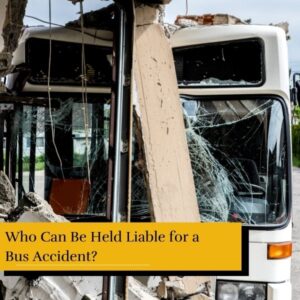 Buses are a part of everyday life for many New Yorkers. In fact, the MTA alone collects more than a million fares every weekday. However, with all the MTA buses, intercity buses, school buses, shuttles, and other similar vehicles on packed city streets and highways, accidents are practically inevitable.

If you were injured in a bus accident in New York, you could be entitled to money to offset your expenses and personal losses. An experienced New York bus accident attorney can gather evidence from the accident, identify who can be held liable, and determine all available sources of compensation.

Why Are Bus Accidents So Dangerous?

Even though bus accidents are less common than car accidents, they have the potential to be far more destructive, for a few specific reasons. First, buses are significantly larger than most passenger vehicles. A bus that is loaded with passengers and cargo can weigh 15 tons. As a result, buses also have an incredible amount of force. When a bus is involved in a collision, it can cause devastating injuries and significant property damage, even at relatively low speed.

While motorists are required to use seat belts, bus passengers generally aren’t. Without seat restraints, bus passengers are more likely to be thrown around in the course of a collision, increasing the risk of injury. Buses also tend to have a high center of gravity, which makes them more prone to rollover accidents. Bus passengers can be seriously injured if a bus flips over, especially if they aren’t wearing seat belts.

Types of Buses in New York

There are many different types of buses in the New York area, including:

Other common types of buses in New York include airport shuttles and charter buses. If you are injured in a bus accident in New York City, the type of bus involved will have significant implications for your claim or lawsuit.

Who is Liable for a Bus Accident in New York?

One reason why bus accidents are more complicated than the average car accident is because determining liability can be quite a challenge, especially without legal assistance. In some cases, more than one party may be responsible for an accident, further complicating the issue of liability.

Below, we have listed some of the potentially liable parties after a bus accident in New York:

Bus accidents can be far more complicated than the typical motor vehicle accident, and you will most likely need the help of a skilled personal injury lawyer to determine liability and seek the compensation you are entitled to.

Statute of Limitations for Bus Accidents in New York

If you are bringing a personal injury lawsuit against an individual motorist or a non-government entity, New York state law typically gives you three years to file suit. If you are planning to sue a government entity, such as the MTA, you will need to file notice with the relevant entity within 90 days of the accident. If you are taking legal action against the city, you should contact a New York bus accident attorney as soon as possible to discuss specific deadlines and requirements.

Were you injured in a bus accident in New York? If so, contact a seasoned bus accident attorney at Finz & Finz, P.C. today for a free, no-risk case evaluation. Our attorneys have the resources to help you recover damages like medical expenses, lost wages, and non-financial losses including pain and suffering. Call us today at 855-TOP-FIRM for a free consultation.