The Dangers of Doctor Fatigue Linked to Medical Malpractice 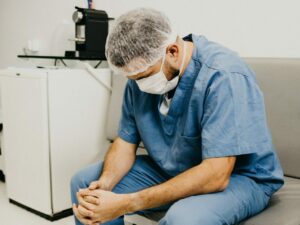 Most people know that getting adequate rest is imperative to being a healthy, functioning human. But this is especially true for individuals in certain career fields, like healthcare, where fatigue and exhaustion can actually end up harming other people.

The Agency of Healthcare Research and Quality reported that before a 2003 rule enforcing stricter measures on how many hours hospital residents could work, many residents would work upward of 90-100 hours per week, and would often work shifts as long as 36 hours, or one and a half days.

According to the Accreditation Council for Graduate Medical Education, current laws limit the number of hours that residents can work to 80 per week, with no single shift totaling more than 26 hours. These laws also dictate that a resident may not work more than three-night shifts per week and must have at least one day off.

Despite these attempts to resolve the issue of doctor fatigue, many residents and physicians don’t abide by the rules because the rate of new medical hires has not kept up with the ever-increasing strain being placed on the healthcare system. There simply aren’t enough physicians to go around, and this means that physicians and residents often work longer hours than is healthy, which can put patients in harm’s way.

If you are a victim of medical malpractice caused by a fatigued physician, you could be entitled to compensation. Our team of experienced personal injury attorneys in New York and Long Island are experienced in investigating cases of alleged doctor fatigue and helping victims get the answers and compensation they deserve.

Doctor fatigue is alarmingly common. In fact, a study conducted by the Stanford University School of Medicine found that more than half of all physicians suffer from doctor fatigue. Doctors who suffer from fatigue are twice as likely to make a mistake that could harm a patient. Nearly 10% of the 6,700 doctors who were interviewed for the study admitted that their fatigue had caused them to make at least one major medical error within three months before the survey was conducted.

About 32% of physicians in the study reported excessive fatigue, and generally speaking, physicians who reported making medical errors were more likely to show signs of burnout, fatigue, and even suicidal ideation.

The results of the study were shocking but not surprising. Other studies have shown that cases of doctor fatigue resulted in:

Why Is Fatigue So Dangerous for Doctors?

Many people who work long hours can empathize with what it feels like to be physically, mentally, and emotionally exhausted after a day of work. Doctors are no different, and just because a doctor is exhausted doesn’t mean they aren’t good at what they do.

There does come a point, however, when fatigue is dangerous, and that’s when it harms other people. According to the National Center for Biotechnology Information, a person is fatigued when they are unable or unwilling to “continue effective performance.” Fatigue is usually caused by sleep deprivation, overworking, and stress.

If you are a patient, it’s important to keep an eye out for symptoms of doctor fatigue. These symptoms can include:

Many professionals in various fields suffer from fatigue and exhaustion due to being overworked, but doctor fatigue is especially dangerous because it involves patients, and a serious medical error could be life-altering or even fatal.

Oftentimes, it is more commonplace, habitual activities that cause doctors to make mistakes when they are fatigued. While tasks that require critical thinking can help physicians stay awake, fatigued doctors can easily make mistakes when it comes to smaller, routine tasks like interpreting lab results, prescribing medications, and administering medicine.

Despite the routine nature of these tasks, even a small error can have disastrous results. Doctor fatigue can lead to:

When Does Fatigue Become Medical Malpractice?

Patients should never suffer because a doctor, nurse, or other medical professional is fatigued. A fatigued doctor might make a major medical error while operating on a patient or misdiagnose a condition and prescribe a type of treatment that doesn’t help the patient. A tired nurse might lose lab test results, resulting in delayed treatment that could save a patient’s life.

If you’ve been the victim of medical malpractice in the state of New York, the New York medical malpractice attorneys at Finz & Finz, P.C., could help you recover compensation for injuries and other trauma you suffered because of a fatigued doctor’s negligence.

No patient should suffer because a physician was too tired to do their job. Some medical malpractice cases can be complex — if you were attended by multiple physicians, for instance – and our attorneys can help you investigate your case, identify the at-fault parties, and bring a strong case that will hold up in court.

If you believe you are a victim of medical malpractice, contact us for a free consultation by calling (855) TOP-FIRM or by reaching out to us online.