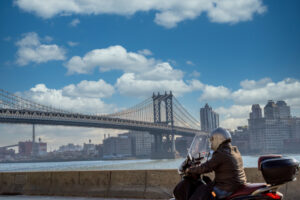 Of all the types of accidents that occur on the roadways in New York, motorcycle accidents are often the most serious. This is due to how exposed and vulnerable motorcyclists are. Motorcycle riders don’t have the protection and safety features that car drivers have. This article will highlight some of the key statistics and facts pertaining to motorcycle accidents on Long Island and New York.

If you or someone you love has been hurt in a motorcycle accident in New York or Long Island that was caused by someone else’s negligence, you might be entitled to financial compensation. The experienced and compassionate New York motorcycle accident lawyers at Finz & Finz, P.C. are ready to fight for the compensation you deserve. Our highly skilled lawyers have provided legal representation for many motorcycle traffic collision victims throughout New York, and we’re ready to help you as well.

Here are 18 statistics and facts regarding motorcycle crashes in New York and nationwide:

How a Motorcycle Accident Attorney Can Help

If you’ve been hurt in a motorcycle accident in New York that was no fault of your own, Finz & Finz, P.C. on Long Island is ready to help. Our skilled and compassionate New York personal injury attorneys will handle all aspects of your motorcycle accident claim. Right after the motorcycle crash, you need an attorney to help you investigate. This may involve interviewing witnesses and collecting evidence from the scene of the accident. Medical records will be needed, so make sure you have all relevant documents from doctors and hospitals.

Finz & Finz, P.C. understands what needs to happen to protect your legal rights after a motorcycle accident. We can also make sure you don’t accept a settlement offer from the insurance adjusters because it will likely be far less than what your case is worth. The insurance companies will also likely try to blame you for the accident. We’ll be able to dispute this with evidence showing that another party is to blame and should be held liable for your losses.

The New York personal injury attorneys at Finz & Finz, P.C. on Long Island have decades of experience and have secured millions of dollars for motorcycle accident victims over the years. If you have been injured in a motorcycle accident in New York or Long Island, you may be entitled to compensation. Our law firm will help you resolve day-to-day issues such as getting the medical treatment you need, repairing your bike, and dealing with insurance companies. To schedule a free and confidential consultation, call us today at 855-TOP-FIRM.