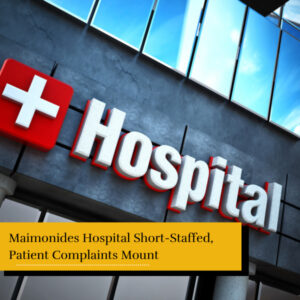 More than 1,000 complaints have been made against Maimonides Hospital in Brooklyn’s Borough Park. These complaints were collected by the “Save Maimonides” campaign, an advocacy group established to combat neglect and mismanagement at the well-known medical center. Residents of Brooklyn have alleged that the hospital is in a state of disrepair and the quality of care is declining.

Why Are Thousands Writing Complaints About Maimonides Medical Center?

Thousands of written complaints against Maimonides Medical Center involve a range of concerns, from understaffing to building code violations. One man interviewed by the New York Post alleges his wife was ignored by doctors and nurses when she gave birth at Maimonides. He said that hospital staff members failed to respond multiple times when alerted and did not arrive to help with delivery until the newborn was halfway out of the womb.

In addition to staffing issues, others have complained that the hospital suffers from poor air conditioning. One doula who regularly helps mothers give birth at the hospital told the Post that she sometimes encourages patients to seek care at other medical facilities because of these air conditioning problems.

The Post also reports that Maimonides Medical Center has accumulated 139 NYC Department of Buildings violations, many concerning its elevators. A hospital executive said that the violations and the air conditioning issues are being addressed, but that has not stopped the Save Maimonides movement.

Brooklyn Paper recently reported that local officials are asking the New York State Department of Health to investigate and swiftly address the issues at Maimonides. Between 6,000 to 7,000 children are born each year at Maimonides, making it one of the busiest maternity wards in New York. The hospital serves patients whether or not they can pay. It’s been called “Brooklyn’s biggest safety-net hospital” by U.S. Rep. Yvette Clarke, many of whose 9th Congressional District constituents receive treatment at Maimonides.

To submit a complaint to Maimonides Medical Center for medical malpractice or other issues, visit their website or contact Patient Relations at 718-283-7212. You can also contact the New York State Department of Health Bureau of Hospital and Primary Care Services at 800-804-5447. In addition, you should contact a compassionate New York attorney to help you determine whether your complaint warrants a medical malpractice lawsuit against the medical center.

Understaffing can lead to instances of medical malpractice in hospitals. When there aren’t enough staff members to provide adequate care for all of the hospital’s patients, those patients are more likely to get injured or suffer medical complications.

Hospitals know how many staff members they need to provide the appropriate standard of care. When they knowingly fail to address understaffing or employee retention issues, they put their patients in danger.

Not all negative medical outcomes constitute medical malpractice. A hospital cannot be sued simply because the outcome of a certain treatment did not yield the results the patient hoped for. Most medical malpractice lawsuits depend on whether the patient can prove that their healthcare provider failed to meet the standard of care that a reasonably competent medical provider with similar experience would have provided in the same circumstances.