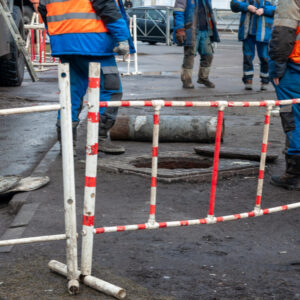 There are 350,000 manholes across all five boroughs of New York City, and although accidents involving manholes aren’t as common as some other types of accidents, that doesn’t mean they don’t happen. Cars driving down New York City streets and pedestrians walking along New York City sidewalks don’t typically expect to encounter loose or sunken manholes, but when they do, accidents can occur.

If a driver gets into a traffic accident or a pedestrian slips and falls on a loose or sunken manhole, it may be possible to hold the city responsible for negligence. If you were injured in the accident, you may be entitled to compensation to cover the cost of medical expenses, lost income, and pain and suffering caused by the accident. However, it can be challenging to get the city to compensate you, which is why having an attorney in your corner can be hugely beneficial.

Manholes cover access points to underground tunnels that city workers use for a variety of functions. Manholes give workers access to underground water pipelines, sewage systems, phone lines, and other city utilities. Manhole covers are thick and extremely heavy metal discs. In some cases, they weigh as much as 300 pounds. When placed properly, they allow traffic to pass safely along a roadway without obstruction.

However, issues can arise if a manhole is accidentally left open by a city utility worker, or if the disc is improperly placed and doesn’t fully cover the hole. It is also possible for manhole discs to become dislodged due to traffic vibrations. Manhole caps are also sometimes dislodged by vandals. There are a variety of reasons why a manhole cover might be left open or improperly placed, but if a city worker was at fault, then the city itself could be responsible for any damages that occur because of it.

When road workers install manholes along roadways, they are supposed to do their best to keep the manhole entrance flush with the street so that incoming traffic can pass smoothly over the top of the manhole when it is not in use. Sometimes, though, manholes are constructed several inches or more below the street level, causing drivers to dip into the sunken manhole as they drive down a street. The same can occur with storm drains that are constructed below street level. When manholes and drains are not flush with the rest of the street, accidents and vehicle damage can occur.

Some of the most common types of accidents caused by loose manhole covers or sunken manholes and drains are:

Proving liability in a loose or sunken manhole case isn’t straightforward or easy. There are many parties who could be at fault. Whether you were a motorist who was injured in a traffic-related accident caused by a loose manhole cover or a sunken manhole, or a pedestrian injured in a slip and fall accident, you have to be able to prove negligence.

In many cases, the city may be held liable. If a city utility worker did not properly replace the manhole cover, or if the local authorities didn’t inspect roadways to ensure that all manholes were properly secured, then you could claim municipal liability. However, it could also be the fault of a repair crew, if the manhole was undergoing repairs and the repair crew did not post warning signage to avoid the immediate area. Investigating manhole accidents can be challenging, and identifying the at-fault parties isn’t always simple. That’s why it is imperative to consult with an experienced personal injury attorney.

If you were injured in an accident involving a loose manhole cover or sunken manhole that occurred because of the city’s (or another party’s) negligence, then you could be entitled to compensation to help you cover the cost of:

How Finz & Finz Can Help

If you were in an accident caused by a loose manhole cover or sunken manhole, contact the New York City personal injury attorneys at Finz & Finz, P.C. Call us today at (855) TOP-FIRM, chat with us live, or fill out a contact form for a case review.