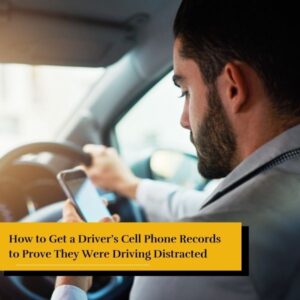 Texting is one of the most common forms of distracted driving, but talking on the phone, using music streaming apps, watching videos, playing games, and doing other activities on electronic devices can also lead to accidents. Below, we will discuss how to obtain evidence of liability, including cell phone records, after a distracted driving-related car crash.

What Is Distracted Driving?

How to Prove a Driver Was Distracted by Their Phone

An experienced attorney can help you obtain copies of the at-fault motorist’s cell phone records. Accessing the driver’s phone data will give you insight into whether they were using their phone prior to the accident, including whether they were receiving or sending text messages. Your attorney must subpoena the driver’s phone company for the records. If the motorist who hit you sent or received any messages right around the time of the accident, this information could be used to prove that they were not giving their full attention to the road.

Evidence at the Scene

While cell phone records are strong evidence, you can strengthen your case even further by gathering corroborating evidence, including evidence you collected at the scene of the accident. If you’ve just been involved in a car accident, you should take photos and videos at the scene of the crash. If you are unable to, have someone else do it for you. Having a visual record of the crash scene can help you show that the other driver was distracted at the time of the accident.

For instance, a lack of skid marks leading up to the spot where the collision occurred means that the driver failed to apply the brakes, which suggests they may not have been paying attention. Visual evidence showing a lack of tire marks left by the other vehicle can further solidify your version of events.

If any bystanders happened to witness the accident, they might have noticed that the at-fault motorist was texting or using their phone at the time. These witnesses can give statements and testify on your behalf, corroborating the cell phone data and visual evidence you already collected. Witness testimony is some of the most compelling evidence you can gather in a personal injury case since third-party bystanders tend to be objective, having no stake in the outcome of your case.

If possible, you should speak to any witnesses at the scene of the accident and ask for their contact details. Your attorney may contact them to get a formal account of what they witnessed.

You are required to contact the police after a car accident in which someone was injured or killed or if an estimated $1,000 or more in property has been damaged. However, we recommend calling the police regardless of the outcome of the accident.

When law enforcement arrives on the scene, they will create an official accident report. This report will contain important details about the accident, including descriptions of any injuries suffered by the victims, notes about the collision, and an initial determination of fault.

If the attending police officer believes that the accident was caused by distracted driving, they will note this in their report. The other motorist could also openly admit to police that they were distracted by their phone at the time of the crash. Any admission of fault will also be included in the report.

New York is a no-fault auto insurance state, which means that motorists must turn to their own personal injury protection policies for coverage after a car accident. However, if you sustained a serious injury, you are eligible to step outside the no-fault system and bring a claim or lawsuit directly against the distracted driver who hit you. Doing so could allow you to seek additional compensation for losses including:

If you were seriously harmed because of a distracted driver, contact a New York car accident attorney at Finz & Finz, P.C. today to discuss your legal options. Our attorneys have the resources to quickly gather and preserve evidence of liability on your behalf, including cell phone records, witness statements, traffic camera footage, and other documentation. We will use this evidence to build a robust personal injury case on your behalf and fight for the compensation you deserve.

Contact us for a free, no-risk consultation by calling 855-TOP-FIRM.