Verification ×
Skip Navigation
Home Blog How Long After an Accident Do You Have to Seek Compensation?

How Long After an Accident Do You Have to Seek Compensation? 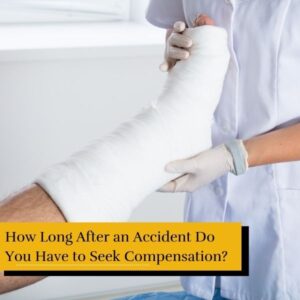 If you were seriously injured in a car accident in New York, you might be entitled to recover compensation for economic and non-economic losses that you’ve suffered as a result of the crash. This may include medical expenses, lost income, and pain and suffering.

However, there are strict requirements and deadlines you should be aware of if you plan to sue the person who caused your accident. And if the accident was caused by the city or another government agency, the deadline to file a lawsuit is even more urgent.

Below, we will discuss who is eligible to seek compensation from a third-party after a car accident in New York, and how long car accident victims have to take legal action.

New York Is a No-Fault State

Because New York is one of a dozen no-fault insurance states, anyone who suffers minor to moderate injuries in a car accident will generally turn to their own personal injury protection (PIP) insurance for coverage, no matter who was at fault for the accident. State law requires all New York motorists to carry at least $50,000 in PIP coverage.

In New York, only individuals who suffered serious injuries, as defined by the state, are able to sidestep the no-fault auto insurance system and pursue a third-party insurance claim or personal injury lawsuit directly against the person who caused their accident. In New York, serious injuries are defined as:

If you were injured in a car accident that someone else caused, and you believe that your injury fits the criteria outlined by the state, then you might be able to file a claim or lawsuit against the negligent party or entity whose misconduct contributed to the accident. It is also worth noting that if you were injured by a motorist while riding a motorcycle, no-fault auto insurance laws will not apply, and you can file a claim against the motorist who hit you.

Statute of Limitations on Personal Injury Lawsuits in New York

You must file a complaint with the appropriate court within this time period, otherwise the court will most likely refuse to hear your case and you won’t be able to pursue the compensation that you need through the legal system. If the statute of limitations passes before you take legal action, you could also lose significant bargaining power with the negligent party’s insurance company, since you won’t be able to threaten them with a lawsuit.

You do not have to obtain a settlement or verdict within the three-year time period. All you need to do is take that first legal step before the three-year deadline passes.

Statute of Limitations on Claims Against a City or Municipality

If you were seriously injured in a car accident in New York City, and you believe that the city was responsible for the accident, you might be entitled to sue the local government. For instance, if you were hit by a police car, fire truck, or city sanitation vehicle, the city could be responsible for compensating you. The city could also be held liable for traffic accidents that occur due to improper construction or failure to maintain a roadway (for example, if you wind up in an accident because of a pothole that the city has failed to repair, the city could be on the hook for your losses).

If your injuries were caused by the city’s negligence, a different statute of limitations applies. In New York, you must file a Notice of Claim against the city within 90 days of an accident. If you fail to make the 90-day deadline, you will be barred from pursuing a claim against the city and unable to recover compensation.

What Types of Compensation Can I Recover?

Through a first-party claim with your own no-fault insurance policy, you should be able to get coverage for medical expenses and lost income up to your policy limits. If you suffered a serious injury, however, you could claim additional compensation by filing a claim against the negligent party (or suing them if necessary).

The amount of compensation you are entitled to recover will depend on the unique factors of your case, including the nature of your injury and personal suffering. For instance, if you were partially paralyzed due to a spinal cord injury you suffered during the accident, your economic and non-economic losses will likely be higher than they are for someone who suffered a bone fracture.

Through a personal injury claim or lawsuit, you could recover:

If you were seriously injured in a New York car accident, contact Finz & Finz, P.C. to talk about your legal options. Whether you are pursuing a first-party claim with your PIP provider or are planning to file a lawsuit against a third party, our New York car accident lawyers have extensive experience helping clients successfully seek the financial relief they need to get their lives back on track. Contact us today for a free consultation by calling our office at 855-TOP-FIRM.