How Common Are Concussions From Car Accidents? 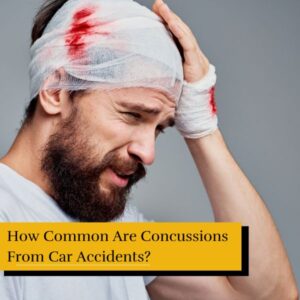 According to the Centers for Disease Control and Prevention, approximately 176 people in the United States die daily from a traumatic brain injury (TBI). A concussion is a type of TBI caused by a jolt, bump, or blow to the head. It can also occur when a force on the body causes the brain to move back and forth rapidly within the skull.

Concussions are serious injuries. Even a mild TBI can lead to debilitating symptoms. Seeking immediate medical care is crucial to recovery and preventing future complications. If you sustained a concussion in a car crash, you must take action against the negligent driver to hold them liable and secure compensation.

Common Symptoms of a Concussion

A concussion is a mild TBI. It bruises and stretches blood vessels and nerves in the brain, causing chemical changes that temporarily affect normal brain function. Typically, one concussion doesn’t cause permanent brain damage. However, multiple concussions can cause irreversible structural changes.

Although a concussion isn’t life-threatening, it can affect someone for days, weeks, or longer. The most common symptoms of concussions include:

Sometimes, symptoms aren’t immediately apparent. You might not notice any issues until days or weeks later. That’s why going to the hospital after a car accident is crucial. Although you feel fine, an underlying problem can lead to complications without prompt and adequate medical attention.

How Car Accidents Cause Concussions

You don’t have to bump your head on the steering wheel or window to get a concussion. A sudden and forceful movement that whips the head forward and backward or side to side can damage the brain.

For example, most seatbelts automatically lock in place at the sign of a collision. Although the seatbelt restrains you and prevents you from being flung from your vehicle, the brain shakes inside the skull from the sudden change in momentum. That can lead to a concussion.

Other safety devices in cars are supposed to protect drivers and passengers from severe injuries or death. However, they can malfunction, preventing them from working as expected. They might also cause injuries due to their design.

Common causes of concussions in car accidents include:

Compensation for a Concussion in a Car Accident

PIP pays for the policyholder’s economic losses up to the policy limit, such as:

State law requires anyone injured in a car accident to file a claim with their PIP insurer before pursuing a third-party claim. You can’t seek compensation from the at-fault driver unless you exhaust your PIP limit and meet the serious injury threshold. That means your concussion results in:

When you file a liability insurance claim or lawsuit, the compensation you receive might cover your:

You might also recover punitive damages in a lawsuit. You must show clear and convincing evidence that the defendant’s conduct showed a high degree of moral culpability or was wanton, reckless, willful, or malicious to be granted this award.

Statute of Limitations for Car Accidents

In New York, the statute of limitations for a car crash allows a three-year timeframe to file a lawsuit against another party. To pursue compensation, you must initiate your lawsuit against the at-fault driver within three years of the crash date. Once the timeframe passes, you could lose your right to hold them liable for your concussion in court.

Finz & Finz, P.C. has a team of nationally recognized advocates for the injured. We fight for clients harmed by others’ wrongdoing. For over 35 years, we have aggressively represented accident victims during their time of need. You can count on us to protect your rights and try to achieve the best possible outcome in your case.

If you sustained a concussion in a car accident due to someone else’s negligence, call us at (855) TOP-FIRM for your free case review now.