Verification ×
Skip Navigation
Home Blog Finz & Finz, P.C. Obtained Two of the Top 30 Settlements in the United States in 2021, According to TopVerdict.com

Finz & Finz, P.C. Obtained Two of the Top 30 Settlements in the United States in 2021, According to TopVerdict.com 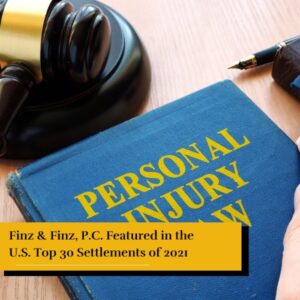 The law firm of Finz & Finz, P.C. secured two of the top 30 largest personal injury settlements in the U.S. last year, according to Top Verdict, which publishes an annual list of the highest legal settlements nationwide. The New York-based firm is nationally recognized as an advocate for injury victims, winning record-breaking settlements and verdicts for clients across the United States.

What Is the Top Verdict Recognition?

TopVerdict.com recognizes attorney law firms nationwide that have obtained the highest jury verdicts and settlements each year. They identify attorneys and law firms based on facts, not the opinion of others, and acknowledge the smallest circle of achievers in the legal industry. This process involves researching court records, collecting electronic submissions by lawyers, and reviewing legal publications and other reputable sources.

Most attorneys and law firms make Top Verdict’s list only once, and only three percent make the same list two years in a row. This demonstrates the firm’s remarkable success rate, as they have made the New York Top Verdict list in 2021, 2020, and 2015.

The National Safety Council (NSC) reported over 55 million injuries and 200,000 preventable injury-related deaths in the U.S. in one recent year. A recent Johns Hopkins study found that more than 250,000 deaths in the U.S. each year are due to medical error, making it the third leading cause of death after cancer and heart disease. But how often do these injuries and fatalities result in personal injury settlements?

The New York personal injury lawyers at Finz & Finz, P.C. are here with the answer to this and other FAQs.

How many personal injury cases are settled in the U.S.?

According to a recent study by the U.S. Department of Justice cited by Forbes, almost all personal injury lawsuits end in settlements, with only four to five percent going to trial. The same study found the median award in personal injury cases is $31,000, while the average settlement for medical malpractice claims is $679,000.

What is the difference between a verdict and a settlement?

Unlike a trial verdict, a settlement is an agreement reached by the plaintiff and defendant outside the courtroom. It generally requires counsel to negotiate vigorously on behalf of their clients to get a fair settlement and avoid going to trial.

Do you need a personal injury lawyer to settle a claim?

There is a lot that goes into settling a personal injury claim. You will need to secure evidence to support your claim, identify your options for compensation, and file claims on time. A skilled personal injury attorney can do all of this for you while you focus on recovering from your injuries. To pursue maximum compensation, you should hire a lawyer to handle your case — especially if your injuries are severe.

If you’ve been injured in an accident that was someone else’s fault, the nationally recognized attorneys at Finz & Finz, P.C. can help you hold responsible parties accountable and seek the compensation you deserve. Our personal injury lawyers are highly skilled in negotiating significant compensation packages for clients. Contact our office today for a free consultation.