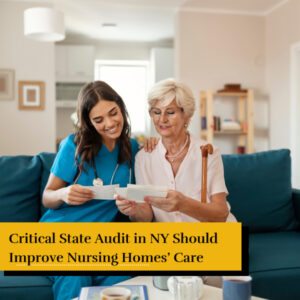 A report conducted by the New York State comptroller has found that state health officials underreported the number of deaths in nursing homes in the early stages of the COVID-19 pandemic. The audit shows that state officials did not account for upwards of 4,000 deaths among New York nursing home residents, broadly confirming an independent investigation conducted by Attorney General Letitia James.

The audit said that the New York Department of Health (DOH) was not prepared for the swift spread of COVID-19 in NY nursing homes and similar facilities in early 2020 despite warnings of what was to come. These problems occurred under the administration of former Gov. Andrew Cuomo. A spokesman for Cuomo dismissed the audit as “old news.”

What Did the Recent New York Nursing Home Audit Review?

They also found that DOH insufficiently surveyed the state’s nursing home facilities for “infection control problems.” Only 20 percent of facilities in New York were surveyed over 10 weeks in 2020, compared to over 90 percent in some other states. Although DOH issued more than 600 violations based on these surveys, there was no evidence that officials fixed these violations in 69 percent of cases.

The nursing home audits in New York revealed that the state’s health department relied on self-reported data from nursing home facilities, some of which was not complete or reliable. DOH also attempted to delay, limit, and control the audit in various ways.

What Is Likely to Change About New York Nursing Home Care?

Gov. Kathy Hochul has said that she will review nursing home policies to examine what went wrong and how to do better in the future. The audit, released by New York State Comptroller Thomas P. DiNapoli, had several recommendations for DOH. It suggests the DOH should improve its external reporting and expand the data the department gathers to better address public health emergencies.

Questions Remain Unanswered for Those with Loved Ones in Nursing Homes

Sadly, many New York residents whose loved ones died of COVID-19 in nursing homes still do not know whether DOH counted their relative’s death. Comptroller DiNapoli said that state health officials misled the public and suppressed important information throughout the pandemic.

“An important step would be for DOH to provide the families who lost loved ones with answers as to the actual number of nursing home residents who died,” DiNapoli said. “These families are still grieving, and they deserve no less.”

Nursing home abuse and neglect are unacceptable, and those responsible should be held accountable. If you believe your loved one is not receiving proper care or is being taken advantage of in a nursing home or assisted living facility, contact the experienced nursing home abuse lawyers at Finz & Finz, P.C. for a free consultation.