Verification ×
Skip Navigation
Home Blog What Are the Most Common Causes of School Bus Accidents?

What Are the Most Common Causes of School Bus Accidents? 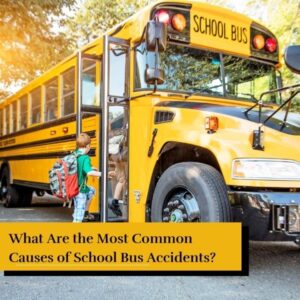 School bus accidents are typically caused by some form of driver negligence or error. Research published by the Journal of Safety Research in 2012 indicated that inattentive and risky driving are both risk factors that have the potential to increase the severity of bus accidents. Bus accident severity was also heightened among younger bus drivers (under age 25) and older bus drivers (above the age of 55). Other types of negligence – including negligence on the part of school districts, bus manufacturers, and government entities – can also factor into school bus accidents.

Below, we will examine how bus accidents happen and what you can do if you or your child is injured in a school bus accident.

When bus drivers make an error that leads to an accident, it can often be tied back to negligence or carelessness. Some of the most common risky behaviors that bus drivers may engage in include:

School bus drivers work long hours and typically start driving very early in the morning. Bus drivers who are not adequately rested might forget to use their blinkers when changing lanes or fail to notice stop signs and traffic lights. According to the Centers for Disease Control (CDC), driving while fatigued is similar to driving while impaired by alcohol. Fatigued school bus drivers might not be able to properly judge traffic situations or appropriately respond to approaching road hazards.

Distracted driving can be visual, manual, or cognitive. Any activity that causes a school bus driver to take their eyes off the road, hands off the wheel, or attention off the task of driving qualifies as a distraction. For example, if a bus driver is texting while driving, they might run a red light or accidentally collide with a crossing pedestrian. Even reaching to grab a fallen item or reading a billboard can cause a bus driver to get distracted for long enough to cause an accident.

School bus drivers who drive under the influence of alcohol or drugs can endanger themselves, their passengers, and other motorists and pedestrians. Consumption of alcohol and drugs reduces a driver’s ability to concentrate on the task of driving and make rational driving decisions. Failing to yield the right of way, swerving into other lanes, erratic braking, tailgating (following other vehicles too closely), and rapid acceleration and deceleration are all common signs of drunk driving.

While drunk driving is always egregious, it is especially deplorable when a school bus driver actively puts children at risk by driving while intoxicated. In New York, a BAC (blood alcohol concentration) of .08 or higher is considered legally intoxicated. However, commercially licensed drivers such as school bus drivers are considered to be legally drunk if they have a BAC of .04 or higher.

Due to their size, school buses require more distance and time to come to a complete stop. If a bus driver suddenly encounters a road hazard and they are exceeding the speed limit, it will be more challenging for them to brake in time to avoid a serious collision. Because school buses are taller and heavier than passenger vehicles, speeding can lead to a severe rollover accident that seriously harms students and others outside the bus.

Driving too fast for conditions can also lead to school bus crashes. Bus drivers should be aware of the fact that larger vehicles take longer to slow down and be prepared to adjust their speed when encountering road construction, inclement weather, and other potentially dangerous conditions.

Although driver negligence is the most common cause of school bus accidents, they can also be caused by mechanical problems. If a school district fails to regularly inspect and properly maintain its fleet of buses, mechanical issues can develop that eventually contribute to an accident. For example, if the district fails to replace brake pads that have worn down over time, and then a school bus’s brakes fail, the bus could collide with other motorists, pedestrians, or objects. In that case, the school district could be liable for compensating anyone who is severely injured as a result of the district’s negligence.

When government entities fail to properly design, construct, or maintain roadways, their negligence may lead to school bus accidents. Unfilled potholes, large cracks, uneven pavement, and poorly designed bus lanes can all contribute to a collision. If an investigation finds that a bus accident was caused by dangerous road conditions, then the local government could potentially be held liable for the accident.

Compensation for a School Bus Accident

If you or your child was seriously injured in an accident involving a school bus, you could be entitled to compensation. In New York, which is a no-fault auto insurance state, accident victims typically turn to their own no-fault auto insurance policies to get coverage for medical expenses and lost income after being hurt in an accident, regardless of who was at fault.

However, if you suffered a serious injury as defined by the state of New York, you could be entitled to step outside of the no-fault auto insurance system and file a personal injury lawsuit directly against the liable party. There could be numerous potentially liable parties after a school bus accident, including the driver, the school district, the bus manufacturer, parts manufacturers, and/or government entities.

Additionally, if your child was injured as a passenger on a school bus, you could be entitled to compensation from many of the same sources listed above. An experienced attorney can review your case and determine who might be liable.

Most school bus accidents are caused by some type of negligence, either on the part of the driver, the school district, another motorist, or some other entity. Students, other motorists, cyclists, and pedestrians can all suffer severe injuries as a result of these accidents, which can leave them with steep medical costs, lost income, and physical and emotional pain and suffering.

If you or your child was injured in a school bus accident, contact Finz & Finz, P.C. for a free consultation to discuss your legal options with a school bus accident lawyer in New York. We will fiercely advocate for your right to seek compensation for your losses. You can reach our office by phone at 855-TOP-FIRM.