A Police Shooting and an Innocent Victim 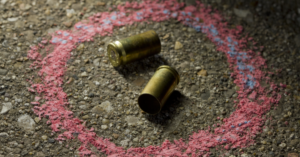 Seated in his patrol car behind some trees, Officer Jones (a fictitious name) had a clear view of the stop sign. Having already given out several tickets to motorists, he observed a white Honda proceed through without stopping at the sign. Immediately, Jones stepped on the pedal, flashed his lights, sounded his siren, and chased the offending motorist for a few hundred yards. The vehicle came to a stop as Jones, right behind, exited his patrol car. He walked briskly to the motorist and said in an officious tone, “Your license and registration please.” The one behind the wheel opened his window. Within a nanosecond, instead of complying, the motorist gunned the engine of the Honda and sped off brushing slightly against Jones, causing him to trip to the pavement. And this is where this sad story unfolds…

Instinctively, Jones withdrew his pistol from its holster and fired off three rounds aimed at the fast-moving Honda. None struck its intended target. Tragically, one bullet struck a young woman who was wheeling her infant daughter in a stroller a few hundred yards away. She dropped to the ground as two pedestrians frantically ran to assist. “Call 911!” one shouted excitedly to the other. Within minutes, another patrol car responded to the scene. Face down on the sidewalk, blood covered the young woman’s light jacket. She had no pulse. No heartbeat. She was dead. A most tragic ending to the life of a young mother and wife.

An action for wrongful death was brought against the municipality and Jones. Surprisingly, the defendants refused to settle this heartbreaking case based upon a defense that the offending motorist had used his Honda as a weapon against Jones. As such, it was claimed that Jones was justified in firing his weapon, since the conduct of the motorist constituted an attack upon a police officer. It was claimed that such an act constituted a felony.  The municipality’s refusal to offer a settlement ultimately led to a trial of the issues before a jury.

A young and inexperienced assistant corporation counsel was assigned to defend the case. But it was easily apparent that he was way out of his league. Our trial team had all the momentum and the case gained even more steam when we called upon a retired police academy expert. As expected, he testified that such a shooting by Jones, under the circumstances, violated a department policy that was designed precisely to avoid the type of disaster that occurred in this unfortunate case. Based upon our deep trial experience, we could tell that we were on our way to a substantial verdict just by reading the shocked faces on the jury. But there was still no appropriate offer forthcoming from the municipality.

At the conclusion of all proof, the young assistant corporation counsel started to sum up to the jury. Before he could get too far past, “Ladies and gentleman of the jury,” he looked toward the ceiling and suddenly stopped speaking. The color of his complexion changed to ashen. He uttered words that were garbled and incoherent. The courtroom was in shock as the judge immediately rang out to the court bailiff, “Take the jury out.” He shouted excitedly to another court bailiff, “Call 911!”

Mayhem broke out as we hurriedly seated the young lawyer in a chair and tried to sooth him while we waited anxiously for the EMT crew to arrive. They responded within 10 minutes and carried him out on a gurney. The judge immediately declared a mistrial and directed that we return to the courtroom the next morning for a new trial-date assignment. Regarding the municipality, the judge called the Comptroller’s office (that in all cases would have to approve any settlement) and ordered that a representative be present.

On the next morning, after several hours of hard negotiations, and with the court’s assistance, the case was settled for a fair amount. But no sum of money could ever bring back the child’s mother or the loving husband’s wife. As for the young lawyer, fortunately, he suffered neither a stroke nor a heart attack. His medical diagnosis? Stress of the trial caused him to experience a spontaneous “anxiety attack.” That indeed was the only good news of this most tragic case. End of story…

Finz & Finz, P.C. has been litigating all types of injury cases for decades. In our experience, every case (regardless of the case type) requires a deep understanding of the law, an aggressive representation, and a strong desire to seek the full measure of justice.