PTSD After A Car Accident In New York 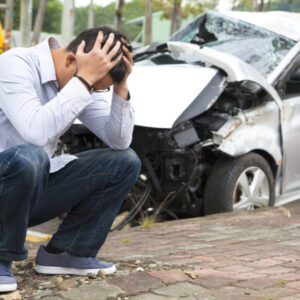 While vehicle safety features such as seatbelts and airbags provide physical protection from injuries after an accident, nothing can protect against the psychological effects of being involved in a collision.

While doctors can detect and diagnose a car accident victim with a traumatic brain injury, broken bones, whiplash, or internal injuries, diagnosing PTSD and other psychological trauma can be more difficult, as this kind of damage is not as tangible or immediately apparent. And in many cases, PTSD develops over time, in the weeks and months following an accident.

Suppose you have been diagnosed with PTSD after a car accident. In that case, you may be able to claim compensation to recover financial and non-financial losses related to the accident, including PTSD. At Finz & Finz, P.C., our compassionate New York-based attorneys have the knowledge and experience needed to help you achieve the best possible outcome in your case. Contact us today for a free consultation.

Some common symptoms of PTSD include:

PTSD may also exist alongside other conditions, such as:

If you have been diagnosed with PTSD following a car accident in New York, then you may be entitled to recover compensation to help cover costs related to your PTSD and other injuries.

New York is a no-fault state, which means that you will typically turn to your own insurance policy to cover damages resulting from the accident such as:

Unfortunately, New York’s no-fault insurance does not typically cover non-financial damages for what is known as “pain and suffering”, which can include PTSD. In order to recover damages for PTSD, you may need to step outside the no-fault system and file a personal injury lawsuit against the party that caused the accident.

To seek compensation from the at-fault driver, you would need to be able to prove that they caused the accident, and you must meet New York’s serious injury threshold.

If you have been diagnosed with PTSD or other injuries following a car accident in New York, don’t hesitate to reach out to one of our dedicated New York car accident attorneys at Finz & Finz, P.C. Our team has the skill and resources to conduct a thorough review of the accident and your injuries, help you gather the necessary evidence to support your case, and pursue the compensation that you need to recover and begin to rebuild your life. Contact us today for a free consultation.