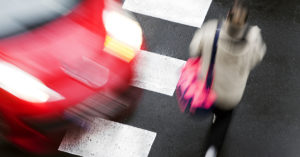 Our client was involved in a pedestrian accident when he was struck by a car while crossing the street near the entrance of the Queens Center Mall located in Queens, New York. As a result of the collision, our client suffered a traumatic brain injury (TBI) and continues to suffer from permanent neurological issues. In a lawsuit that our law firm filed on his behalf, the City of New York is charged with failing to properly study and install safety devices – such as a mid-block traffic light, stop sign, crosswalk, or pedestrian-crossing warnings – to protect pedestrians crossing the street mid-block at the mall entrance, even though the city had received prior complaints of the potential for pedestrian danger. Our firm also filed a lawsuit against the vehicle that struck our client for unsafe driving and failing to yield to a pedestrian, and against the driver of an illegally double-parked car, which partially blocked the sightlines of the automobile that struck our client.

After the commencement of litigation, and following the completion of voluminous depositions and document discovery, the City and the drivers of the two cars involved each moved for summary judgment, seeking to dismiss our client’s case. The City argued that it had adequately considered safety measures for this location, but based on their studies, no safety measures were necessary. The City further argued that it could not be held liable due to the doctrine of governmental immunity, which insulates the City from liability when it has properly studied a particular traffic-related danger and decided against the installation of safety devices based on the result of that study. The drivers of the two cars at issue argued that our client was solely responsible for the accident because he crossed the street outside the presence of a crosswalk. We vigorously opposed these motions. In support, we submitted expert affidavits, federal studies, and New York City documents to the Court demonstrating that the City failed to conduct a proper traffic-safety study and failed to install safety devices that would have prevented this accident. In addition, with the support of our accident reconstruction expert, we argued that the driver of the vehicle that struck our client and the driver of the double-parked car could have, and should have, taken steps to avoid the accident that resulted in our client’s injuries.

Initially, New York State Supreme Court Justice Joseph J. Esposito agreed with the defendants. On January 29, 2020, Judge Esposito issued a decision granting summary judgment in favor of the defendants and dismissed our client’s case in its entirety. However, after reading the Court’s decision, we were convinced that the Court misapprehended the facts of the case and New York State law. We were committed to our client and therefore immediately filed both an appeal to the New York State Appellate Division and a motion asking Judge Esposito to reconsider his decision and allow for oral argument. The lengthy motion and written appeal were authored by Benjamin P. Jacobs, our firm’s Appellate Attorney. On September 16, 2020, Stuart L. Finz, our firm’s Senior Trial Attorney and CEO, argued the motion before the Court. Shortly thereafter, Judge Esposito reversed his decision in its entirety. His decision, entered into the Court records on October 2, 2020, restored our client’s case against the City of New York, the driver of the car that struck our client, and the driver of the double-parked car. The case is now on track for a jury trial in Queens County Supreme Court in early 2021.