Self-Driving Cars Linked to Hundreds of Crashes and Deaths 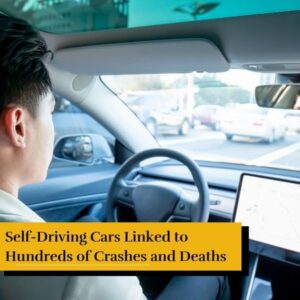 The National Highway Traffic Safety Administration (NHTSA) recently released a study on “self-driving” cars and related accidents, which found that the technology was behind hundreds of crashes and several deaths over the last several years. In 2021, under a new rule, the NHTSA began requiring all accidents involving autonomous cars to be reported to the agency by manufacturers and operators.

Specifically, the NHTSA is concerned with cars that have automated driving systems (ADS), including SAE Level 2 advanced driver assistance systems (ADAS). Level 2 ADAS are technically “self-driving” and have the ability to control driving functions like speed and steering, but still require human input at all times.

According to the report, there were 392 crash reports involving Level 2 ADAS vehicles from July 2021 to May 15, 2022. Of those crashes, 273 involved Tesla vehicles, while 90 involved Hondas and 10 involved Subarus. Tragically, some of those accidents also involved fatalities. The report revealed that these crashes resulted in six deaths and five cases of severe injury.

The New York Times reports that there are presently around 830,000 Tesla vehicles with some form of self-driving technology. The sheer number of Tesla cars with automated driving systems may be the reason why the largest portion of crashes involved Tesla vehicles.

In addition to the report on ADAS vehicles, the NHTSA also gathered data on fully autonomous cars. According to the NHTSA’s report on vehicles with Levels 3-5 ADS, from July 13, 2021 to May 15, 2022 the agency received 130 reports of accidents involving ADS-equipped cars. Per the report, eleven of those crashes involved a “vulnerable road user” such as a cyclist, pedestrian, or other non-motorist (such as a scooter rider).

CNBC reported on a fatal crash involving a Tesla with a partial automated driving system in Queens in September 2021. The incident was recorded and investigated by the NHTSA. A 52-year-old man was changing a flat tire on the Long Island Expressway in July 2021 when he was struck and killed by a Tesla Model Y SUV.

This fatality occurred just three weeks after the NHTSA began formally investigating partially-automated driving systems to determine how they have collided with parked emergency vehicles. Because these systems have been found to prevent accidents and save lives, the NHTSA has been hesitant to introduce regulations that would govern autonomous vehicles. However, given the recent crash reports, the agency has begun probing ADS more decisively.

According to the SAE, there are six levels of automation, ranging from Level 0 to Level 5. Let’s briefly examine each level:

Fully-automated vehicles are not common, and most vehicles with automated driving features still require the driver to exercise some level of control over the car.

What If I am Involved in an Accident with a Self-Driving Car?

The majority of autonomous vehicle accidents can still be attributed to driver negligence. This is because most types of automated vehicles still require driver input. While a computer malfunction or a faulty part could potentially lead to a self-driving car collision, the person behind the wheel still bears responsibility for the safe operation of their vehicle. Because most vehicles with ADS are not fully automated, motorists have a responsibility to remain vigilant and to be prepared to intervene in hazardous situations.

Self-driving vehicles can be dangerous because they give the operator a false sense of security. Because most vehicles with automated features still require human interaction, it’s important for motorists to remain alert and be ready to take the wheel at any point in time. Unfortunately, automated features have led motorists to neglect their driving duties and to engage in unsafe behaviors that can eventually lead to an accident. Some of the most common types of driver negligence include:

If you were seriously injured in an accident with a self-driving vehicle, you might be entitled to recover compensation for your medical expenses, lost wages, pain and suffering, and other losses. In general, motorists who own cars with self-driving capabilities are still responsible for the safe operation of their vehicles, and they can be held liable for a crash if someone is severely injured.

Were you seriously hurt in a crash with an automated vehicle? Contact the self-driving car accident attorneys at Finz & Finz, P.C. for a free consultation to discuss your legal rights and options. While it can be challenging to determine liability when you’re involved in an accident with a self-driving vehicle, our attorneys have the resources to identify all potential sources of compensation and fight for fair financial relief on your behalf. Call us today at 855-TOP-FIRM for a free initial consultation.