How Illegal U-Turns Cause Accidents 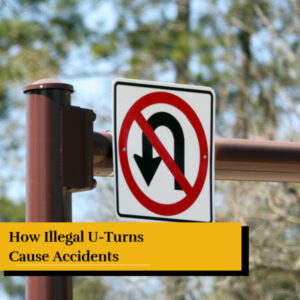 Were you injured in a collision involving a driver who made a U-turn in New York? Are you unsure whether their maneuver was legal, or if you have the right to hold them accountable for negligence?

If you’ve been involved in a U-turn accident and are unsure who was at fault, turn to an experienced New York car accident lawyer at Finz & Finz P.C. for help. Below, we’ll discuss New York’s U-turn laws and your rights if another driver injured you while making this type of turn.

In New York, a U-turn is defined as “any turn you make, so you can proceed in the opposite direction.” Three-point turns are considered U-turns according to the DMV. You may not make a U-turn near the top of a hill, on a curve, or anywhere an oncoming car cannot easily see your vehicle, in NYC business districts, in school zones, or where “NO U-TURNS” signs are posted.

U-turns are legal if others can see you and traffic is clear. You must start your turn from the left-hand lane, unless another lane is marked as the U-turn lane. If there are oncoming cars or bicycles, you should not begin your U-turn until they are clear. If your vehicle’s turning radius does not allow you to make the turn from the left lane, you should not execute it. This is where many drivers run into trouble.

When Are U-Turns Are Prohibited in New York?

In New York, U-turns are expressly prohibited in:

These prohibitions mean that in any situation where a driver is attempting to go back even a few blocks, a “quick U-turn” may not be the safest or the legal way to do so. If there is not a marked U-turn lane available, you should always find a legal space to turn around, rather than whip a quick U-turn in the middle of the block.

Why U-Turns Are Dangerous

U-turns are dangerous because they are often unexpected by both drivers. The oncoming driver did not expect the turning driver to swerve in front of them suddenly, and the turning driver may have suddenly turned after missing their destination. Neither driver was thinking about what they were doing, and certainly not expecting a collision.

U-turns are more dangerous than standard left turns. This is particularly true because:

Drivers can perform U-turns safely if they pay attention and wait until the road is clear of oncoming traffic. If there is any question about whether the road is wide enough for your vehicle or if there is sufficient space between cars, consider going to the next turn lane and making your turn at the signal.

Consequences of an Illegal U-Turn

U-turns are frequently executed in the middle of busy streets or crowded intersections, making them particularly hazardous to motorists, pedestrians, cyclists, and anyone else nearby. If an oncoming driver does not see the person making the turn in time, they are likely to strike the turning car at full speed when the driver is looking away from oncoming traffic. Pedestrians and bicycle riders are also at risk of being injured by drivers making illegal U-turns, since they expect drivers to obey traffic regulations and be alert for people in bike lanes and crosswalks.

If you have been injured in a U-turn collision, don’t wait until it is too late to seek answers, justice, and fair compensation. At Finz & Finz, P.C., our New York car accident lawyers could answer your questions and help you understand your rights and legal options. Our attorneys will be ready to stand up and fight for you when you call us at (855) TOP-FIRM or reach out to us online for a free and confidential consultation.