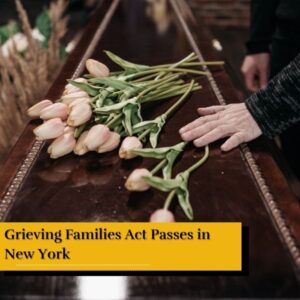 No one is prepared to lose a loved one in an accident caused by someone else’s negligence. Even though surviving family members in New York have the right to seek compensation through a wrongful death lawsuit, the law often doesn’t consider the full impact of an untimely loss.

Under the current law, which was established in the 1800s and has not been significantly modified since, families can only obtain compensation for financial losses related to their loved one’s death, such as lost wages and funeral expenses (and in some cases, loss of guidance when a parent of a young child is killed). In practice this means that New York law significantly restricts a family’s ability to bring a lawsuit after losing a loved one who was not a high-earning worker. For example, New York law strongly discourages and devalues lawsuits brought in connection with the death of an elderly family member or a child because financial compensation is not permitted in lawsuits alleging emotional grief and emotional suffering.

A new bill amending the law, the “Grieving Families Act” (SB S74A), recently passed the New York State Senate and the State Assembly. It could soon be signed into law by New York Governor Kathy Hochul. This bill would amend the current statute to allow grieving families to recover more than just monetary damages from the person or entity responsible for their family member’s death.

Below, we will discuss the Grieving Families Act and the impact that this legislation will have on New Yorkers who lost a loved one due to wrongful death.

The Grieving Families Act aims to remedy numerous issues with New York’s current wrongful death law. The present statute doesn’t allow family members of people killed due to a negligent act to recover compensation for emotional losses they suffered in the wake of their loved one’s death.

While family members can recover pecuniary damages (monetary losses) such as funeral expenses, burial costs, lost income, medical costs incurred by the deceased before they passed away, and other financial damages, the current, antiquated statute does not account for non-financial losses such as emotional pain and suffering.

Finally, the current statute only permits certain family members to recover compensation and does not recognize the victim’s other close loved ones. For example, under the present law, a victim’s unmarried partner could be prohibited from recovering financial damages through a wrongful death lawsuit because they don’t qualify as a family member, even though they were a close loved one of the deceased.

The Grieving Families Act will amend the current wrongful death statute by acknowledging that the current law is lacking in numerous ways. First, the bill recognizes that current law doesn’t consider surviving family members’ grief when determining a financial reward. And second, it acknowledges that the present law fails to account for the victim’s actual loved ones, as opposed to specific family members, and prevents such individuals from recovering equitable losses.

The new act would allow a victim’s loved ones to recover more than just financial damages through a wrongful death lawsuit, and it would also expand the definition of “family“ beyond immediate relations like spouses and children to include other individuals who were close to the deceased, including unmarried partners.

Proposed Changes Under the New Bill

Under the new law, the victim’s loved ones will be able to recover compensation for a variety of losses, including but not limited to:

If the bill is officially signed into law, the New York wrongful death statute will at long last recognize the grief that family members of wrongful death victims suffer. It will also give loved ones (including non-biological relations and unmarried partners) the opportunity to pursue equitable damages.

By allowing surviving family members to be compensated for their grief and emotional losses, the amendments to the current law will also provide meaningful accountability to negligent individuals whose actions caused the death of an innocent person.

What Is the Status of the Grieving Families Act?

The New York State Senate has officially passed the legislation, as has the State Assembly, where it had broad support. The bill will now go to Governor Hochul’s desk for signature. Given the overwhelming support for the bill, it is expected to be signed into law soon.

Did your loved one die because of another person‘s negligence or misconduct? If so, you could be entitled to recover compensation by bringing a wrongful death lawsuit against the at-fault party.

The New York wrongful death attorneys at Finz & Finz, P.C. have extensive experience litigating wrongful death cases and helping our clients pursue the justice they deserve. If the new legislation is signed into law, our firm will be ready to help grieving families seek compensation for emotional losses in addition to pecuniary damages.

Contact us today for a free consultation to discuss your case. Our attorneys work on a contingency fee basis, so you won’t owe anything unless we obtain a successful financial recovery on your behalf. Reach out to our office today.