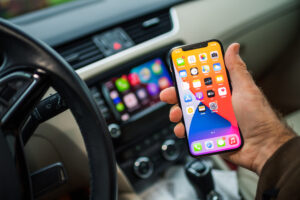 Distracted driving is a major cause of car accidents, being cited as a contributing factor in eight fatal crashes each day across the United States.

There are many causes of distracted driving, ranging from wandering minds, looking at something besides the road ahead, to engaging in non-driving-related activities such as eating and using a cell phone.

Although using a cell phone while driving is prohibited in New York, the ubiquity of infotainment systems in modern cars has essentially seen drivers replace one distraction with another.

Despite the potential danger of this relatively new technology, there are ways that you can mitigate its increased risk of causing a car accident. This article will explain the potential distractions of in-car infotainment systems, and what you can do as a driver to protect yourself and those around you.

How distracting are in-car infotainment systems?

In 2017, AAA and The University of Utah conducted a study into the potential for driver distraction caused by in-car infotainment systems. The study found that of the forty cars tested, every single vehicle had infotainment features that could regularly divert drivers’ attention away from the road for more than two seconds.

The danger created by in-car infotainment systems is therefore enormous, as studies have indicated that looking away from the road for two seconds doubles your risk of a car accident.

By far the most distracting element of the infotainment system is when a driver enters a destination for navigation. According to the study, the average time it takes for a driver to complete this task is forty seconds. Putting it into perspective, if a car is traveling at 25mph for forty seconds, it would cover 1,500 feet — all while a driver’s attention is only partially on the road ahead.

In order to reduce the potential for distracted driving, AAA concludes that vehicle manufacturers should either scale back the features contained in the infotainment systems or disable certain features while the car is in motion.

How can a driver reduce the risk of distractions caused by infotainment systems?

The only surefire way to ensure that your infotainment system does not create distractions is to avoid its features while the vehicle is in motion.

The most distracting features of infotainment features found in AAA’s study were:

The study also found a huge variation between the distraction potential of the infotainment systems found in different makes of cars.

Cars that use Apple CarPlay and Android Auto Systems were found to be between 25-35% less distracting than ones that had native infotainment systems. This was measured by comparing the amount of time, and the level of attention, required to complete the same tasks across the different systems.

Similarly, infotainment systems that used audio control, rather than touchscreen or mechanical systems, were found to create less demand on a driver’s attention, as drivers did not have to take their eyes off the road.

As a follow-up to AAA’s study, Consumer Reports tested the distraction potential of infotainment systems in twenty popular makes of cars. Here are some of their findings:

Cars with the most distracting infotainment systems:

Ultimately, the ease of use of infotainment systems depends in part on the driver. You should always test how easy it is to navigate through different tasks on your infotainment system while your car is stationary in order to understand what may or may not be safe for you while driving.

What happens if you are in an accident with a distracted driver?

Driving safely requires a driver’s full attention. Therefore if you were involved in an accident with another vehicle in New York, and the driver’s attention was diverted prior to or at the time of the accident, then they could be found to be negligent.

If you suspect that another person’s distracted driving was a contributing factor in your car accident, then you should contact the car accident attorneys at Finz & Finz, P.C. on Long Island or in Manhattan.

This article was contributed by Mike Skoropad, CEO of tire retailer United Tires.