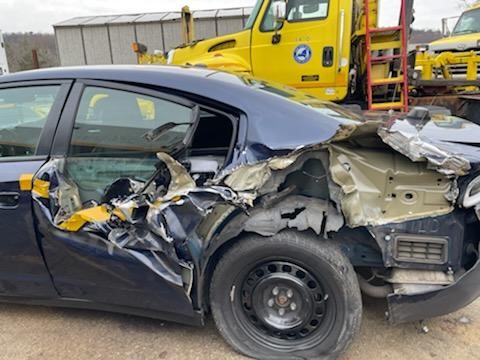 In a news release, police said the accident took place on Interstate 87 south in the town of Greenburgh shortly before 6 a.m.

Trooper Carlos Desilva was inside his marked State Police car while it was parked on the right shoulder of I-87. Investigators said Desilva was monitoring traffic between exits 7 and 7A when the driver of a southbound Freightliner box truck drifted off the roadway onto the shoulder and struck the trooper’s car on the driver’s side.

Desilva sustained injuries that were not life-threatening. He was treated and released from Westchester Medical Center. Desilva is a 15-year-veteran of the state police who is assigned to SP Tarrytown.

The driver of the Ace Endico box truck, 35-year-old Michael Geleski of Fishkill, and his passenger were not injured in the crash.

State Police are continuing to investigate the accident. They said the incident serves as a reminder to drivers to slow down and move over when emergency and construction vehicles are working on the highway.

Truck accidents often leave the occupants of smaller vehicles with more severe injuries than those from a typical car accident. The New York truck accident lawyers of Finz & Finz, P.C. fight to get our clients injured in such accidents the maximum compensation they need. We help accident victims obtain the resources to pay for their medical treatments, lost wages and other expenses. To learn how we can help in your specific case, contact Finz & Finz P.C. at 855-TOP-FIRM today to discuss your legal options.