RAMAPO, NEW YORK, NY – Authorities say a tractor-trailer driver was killed in a crash after his vehicle was sideswiped in Rockland County last week, the Daily Voice reports. 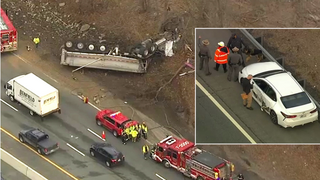 The victim has been identified by New York State Police as 38-year-old Victor M. Naula Lopez of Whitestone, Queens.

The accident occurred last Friday morning as Naula Lopez was driving a Peterbilt tractor-trailer on the New York State Thruway near Exit 14B in Ramapo at about 5 a.m.  According to investigators, the tractor-trailer spun out after it was sideswiped by a white Toyota rental car.  The truck then hit a Freightliner semi before overturning in a wooded area.

Naula Lopez was pronounced dead at the scene.  The driver of the Freightliner, 56-year-old Celso A. Lopez of New Rochelle, was not hurt.

Authorities said the driver of the Toyota ran away after the crash. The Toyota is now being held as evidence at the State Police Troop F headquarters.

Police are continuing their investigation into the crash, which caused extensive traffic delays that morning on the New York State Thruway.

If you or someone close to you has been injured in a car accident caused by the carelessness or neglect of another person, it is important to consult with an experienced personal injury lawyer. At Finz & Finz, P.C. our New York motor vehicle accident lawyers can help accident victims seek fair and just compensation to cover the expenses they have incurred.  We have obtained record-breaking results for people who were injured in crashes.  To schedule a free consultation, call 855-TOP-FIRM today or reach out online.