YAPHANK, LONG ISLAND, NY – Two vehicles were involved in a crash on Long Island Monday afternoon that left a teenager dead, according to Newsday. 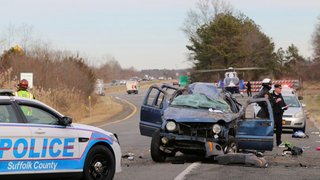 The accident happened on the Long Island Expressway near Exit 66 in Yaphank at about 2:20 p.m. Suffolk County Police say 22-year-old Franklin Eduardo Sajbin was driving a 2004 Jeep east on the LIE when the vehicle struck an Alfa Romeo. The Jeep struck a guardrail, went over an embankment and landed on a service road.

Sajbin’s cousin, 18-year-old Katherine Sajbin of Riverhead, was a back-seat passenger in the Jeep while her mother, 40-year-old Violeta Sajbin, was in the front seat. They were both thrown from the vehicle.

55-year-old David Cohen of Old Bethpage, who was driving the Alfa Romeo, was not hurt in the crash.

Authorities say the two vehicles involved in the wreck were impounded for a safety check.

After a serious traffic collision, you may be left with costly medical bills and other expenses.  At Finz & Finz P.C. we have more than 30 years of experience helping New York car accident victims seek the full and fair compensation they deserve. If you or someone you love were seriously injured or killed in a car accident caused by someone else’s negligence, our compassionate New York car accident lawyers are ready to fight for justice for you. Call 855-TOP-FIRM or reach out online to set up a free and confidential consultation.