SLEEPY HOLLOW, WESTCHESTER, NY – A driver is under arrest after a car crashed into a deli in Westchester County early Sunday morning, CBS2 New York reports. 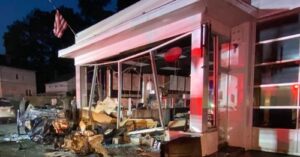 (Photo from the River Journal)

The accident happened at The Horseman Deli in North Broadway in Sleepy Hollow, which had just opened four months ago. According to police, the driver of a sedan crashed into the front window at about 3 a.m. No one was inside at the time.

When police arrived, the driver and four passengers who were in the vehicle had left the scene on foot. Police later learned that the four passengers, three men and one woman, had gone to Phelps Hospital for treatment of their injuries.

The driver, a Sleepy Hollow man, turned himself in to authorities later and was charged with leaving the scene of an accident, personal injury.

The owners of the deli said that their business had sustained significant damage and would have to shut down for several months while making an estimated $100,000 in repairs. Investigators were trying to determine whether drugs or alcohol were factors in the accident.

Have you sustained serious injuries or damages in a car accident caused by someone driving recklessly?  Then contact the New York car accident lawyers at Finz & Finz, P.C. for the legal assistance you need. We will schedule a free auto accident case evaluation where you can speak to a highly experienced lawyer and learn more about your legal rights and options for compensation for your injuries and other damages. Call 855-TOP-FIRM to learn more about how we can help you during this challenging time.