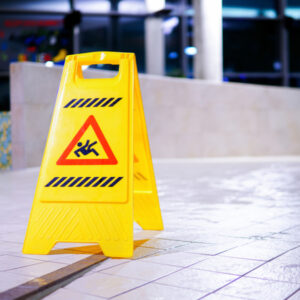 Our client was making a trip to Toys “R” Us to purchase toys for her grandchildren on one winter day. It had rained and snowed earlier in the morning, and by the time our client arrived, a sheet of ice had formed on the walkway outside the store. While leaving the store, our client slipped on the ice and fractured her ankle.

Under New York law, landlords and property managers have a responsibility to reasonably safeguard their properties from dangers posed by bad weather. Otherwise, slip and fall accidents and injuries – such as the one suffered by our client – are likely to occur. Accordingly, we commenced an action against the landlord and property manager of the Toys “R” Us building, who we believed were negligent in failing to treat the walkway and remove the icy condition.

The landlord and property manager did not dispute their obligation to safely maintain this walkway, and even acknowledged that nothing was done on the morning of the accident to render the icy walkway safe for pedestrians. Instead, they moved to dismiss the case (also known as “Summary Judgment”) based on a defense known as the “storm-in-progress” doctrine. New York courts give defendants a certain degree of leeway when it comes to removing ice and snow following a storm. In fact, property owners and managers are not required to remove ice or snow until several hours after a storm has passed. Accordingly, in “storm-in-progress” cases, it is critically important to investigate and uncover evidence that establishes the timeline of events on the day of an accident.

Here, in support of their motion to dismiss this case, the defendants hired a meteorologist to review weather records and issue an opinion regarding when the precipitation had stopped. Their expert authored a detailed report asserting that some form of rain, whether freezing or otherwise, continued up to approximately the time of the accident. The report was supported by detailed weather records from a monitoring station at a nearby airport.

There were no weather records that appeared to support our case, however, during the litigation discovery process, Trial Attorney Todd M. Rubin deposed two Toys “R” Us employees, one of whom testified that the snow and rain had stopped several hours prior to the accident. In addition, our client provided a sworn statement that the rain and snow had stopped by the time she entered the store. Furthermore, we engaged an industry leading meteorologist to counter the report authored by the defendants’ meteorologist. Our expert reported that although the nearby airport had properly collected weather data, the distance from Toys “R” Us to the airport was great enough that the weather conditions could have differed between the two locations. In opposition papers drafted by Appellate Attorney Benjamin P. Jacobs, we argued that in such circumstances, the timeline of weather events should be established by “boots on the ground” testimony rather than the weather reports.

Typically, when defendants seek dismissal before trial, they often suspend settlement negotiations until the court makes a determination. In this case, however, our opposition was strong enough to force the defendants to mediate, and the case was settled. In fact, our opposition was so strong that after the settlement, Judge George M. Nolan of the Supreme Court of New York, Nassau County, subsequently issued a decision agreeing with our position and denying the defendants’ motion.

Together, these two key aspects will maximize the likelihood of the case surviving a motion to dismiss, and ultimately the financial result for the client, even in the face of strong opposition from the defendants.