A Train Accident and an Unbelievable Story 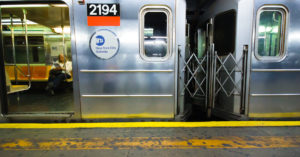 One of the inspirational songs of the iconic Broadway musical “Fiddler on the Roof” starts off with a classic first line: “Wonders of wonders, miracles of miracles.” With attribution to “Fiddler’s” extraordinarily gifted song-writers, Sheldon Harnick and Jerry Bock, I introduce this incredible and inspirational story…

A 30-year-old female passenger was walking through one car to another on a train in New York. Suddenly, she fell between the two cars and onto the tracks. The train ran over her legs and severed her left foot and right leg. Seeing what occurred, a passenger frantically pulled the emergency cord. As a result, the moving train came to a sudden halt. Emergency medical crews arrived within minutes and rushed the bleeding victim to a specialized hospital in Manhattan. Without hesitation, her severed limbs were placed in ice bags and rushed to the hospital by a police vehicle.

Waiting at the emergency entrance of the hospital for the arrival of the victim, the hospital staff wheeled her onto a gurney and sped off immediately to the operating room. There, she was met by a team of micro surgeons, who had been alerted and ready. They operated on the victim for over eight hours. Their most difficult task was to reattach the severed limbs that had been hurriedly removed from the ice bags. Despite their surgical efforts, where every second counted, her right foot was beyond attachment, as was her left leg above the ankle.  Having reached this devastating roadblock, one of the three surgeons came up with the following remedy….

Working tirelessly, they performed microsurgery by reattaching the severed left foot to her right leg in the first microsurgical lower limb transposition performed in the United States.

We were retained by the victim and her family several weeks after the microsurgery was performed. Our lawsuit against the train company claimed that there was a failure in its lack of safety for passengers who were known to move from one car to another. Under the knowledge that the train company had or should have had, there should have been no space between the cars of the train through which a passenger could accidently fall.  The defendant resisted our action at every turn, but we continued to move aggressively, technically, and creatively through the New York court system up to the point of trial. Based upon our decades of experience in representing victims who were seriously injured or killed through the negligence of others, there was no power that could stop our quest for justice on behalf of our injured client and her family. Having presented the shocking facts to the court and jury, the case was settled for a substantial amount, and justice had been achieved!

The case that described in minute detail the reattaching of the severed left foot to the right leg as the “first microsurgical lower limb transposition performed in the United States,” was widely reported by the national media. Once again, in life, we were all witness to “Wonders of wonders, and miracles of miracles.”